On Thursday night, the NHL announced its initial rosters for the 2023 NHL All-Star Game and Igor Shesterkin will be representing the New York Rangers.

This season, the NHL selected one player from every team to make up the initial eight-man rosters for each division. The three remaining players per division (2 skaters and 1 goalie) will be decided by fans via a Twitter vote which begins on January 12 and ends on the 14th.

According to the NHL’s website, each player vote must also include the following hashtag: #NHLAllStarVote

You can also vote here.

Igor Shesterkin is once again one of the top NHL netminders with a record of 18-6-5 on the season. He’s also posted a GAA of 2.43 and a save percentage of .917 including one shutout.

Among goalies that have played at least 15 games in 2022-23, Shesterkin ranks tied 3rd for wins, 10th in GAA, and 9th for save percentage. Per Natural Stat Trick, his .866 high danger save percentage at even strength (minimum 900 minutes) ranks 5th.

In earning his first All-Star Game selection, Shesterkin becomes the seventh goaltender in franchise history (Chuck Rayner, Gump Worsley, Ed Giacomin, Gilles Villemure, Mike Richter, Henrik Lundqvist) to be selected to participate in the All-Star Game. He is the 17th goaltender in NHL history to win a Vezina Trophy prior to being selected/playing in an All-Star Game.

It wasn’t that long ago after back to back losses to the Edmonton Oilers and the New Jersey Devils in late November that Igor brutally criticized himself.

While the reigning Vezina Trophy winner struggled earlier in the season, he’s still been very good and the catalyst for the Rangers recent turnaround.

According to NHL Stats, here’s how Shesterkin’s numbers rank from December 5 to date versus other goalies who have played at least seven games. 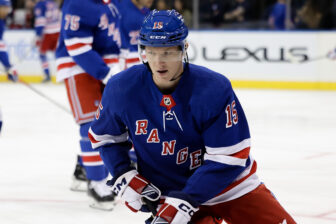