The New York Rangers were down 3-1 to the Devils on Monday night when Igor Shesterkin provided the spark they needed to extend their winning streak to four straight games.

After Braden Schneider let Jack Hughes get behind him, it forced a trip and a penalty shot for New Jersey’s leading scorer. The young star scored on an odd man rush a few minutes earlier with a deftly skilled backhand over Shesterkin’s glove.

Knowing that another goal at this stage in the contest would likely mean a loss, Shesterkin put his focus into overdrive and waited out the talented Hughes.

A quick flash of his left skate knocked the puck away and Shesterkin’s record on penalty shots remained perfect (0-3).

New York would tie the game with two quick goals seven seconds apart off the momentum gained by that save and eventually won it in overtime.

It wasn’t that long ago after back to back loss to the Edmonton Oilers and these same New Jersey Devils in late November that Igor brutally criticized himself.

While the reigning Vezina Trophy winner has not played up to last year’s standards he’s still been very good and the catalyst for the Rangers recent winning streak.

According to NHL Stats, here’s how Shesterkin’s numbers rank from December 5 to December 12 versus other goalies who have played at least three games.

“Everybody knows how I can play. I tried to reach that again and try to forget about last season. Just keep my focus on this year. I hope it’ll be a better year for our team.” 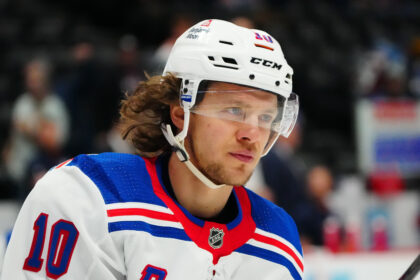