Artemi Panarin is a play-making machine from left wing

Artemi Panarin now sits tied with Luc Robitaille for most assists at 411 in their first 8 seasons in the NHL according to TSN. The New York Rangers leading scorer can break the tie as soon as Thursday when the Blueshirts take on the Toronto Maple Leafs.

When Filip Chytil fired the puck behind New Jersey Devils goalie Vitek Vanecek on Monday night in overtime, Panarin was the man who set him up. That assist also extended Panarin’s point streak to six games (11 assists) and gives him 35 points (6 goals, 29 assists) in 30 games this season.

Johnny Bucyk of the Boston Bruins holds the record for most assists by a left wing with 813 accumulated over a 23 year career that spans 1,540 regular season games. (via NHL Stats)

Panarin, 31, started his Broadway career in impressive fashion scoring a career-high 32 goals and 95 points in just 69 games. Unfortunately, the season was cut short due the pandemic as Panarin was on a pace to score 112 points.

The following season was a 56 game slate making it impossible for him to top his inaugural campaign on Broadway. Of course, given a normal schedule the Breadman once again set career highs for assists (74) and points (96) in 75 games.

At this point, he’s on pace for another 96 point campaign and has yet to crack the century mark in his career.

It would be great to see him go on a run with some multiple point games to get on track for a 100 point this season. If he does, Panarin will be the first Blueshirt to do so since Jaromir Jagr notched a franchise high 123 points in 2005-2006.

Only 6 Rangers’ players in team history have ever been able to hit 100 points, 4 of them were able to do it in the same season. 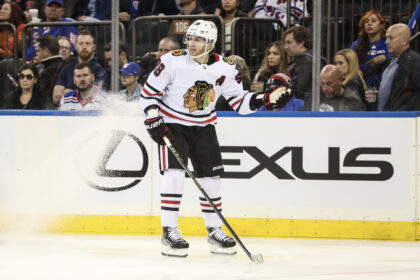 Also Read:
Will the Rangers have to extend Patrick Kane in order to trade for him?