Will the Rangers have to extend Patrick Kane in order to trade for him?

Patrick Kane has been linked to the New York Rangers dating back to last season’s trade deadline. Of course, a deal was near impossible at the time because he had one more year remaining on his 10-year contract with a hefty cap hit of $10.5 million.

This season, despite some recent struggles, the Blueshirts are considered the top destination for Kane at the trade deadline on March 3. It’s not a given because there will be more suitors as we get closer to the date.

In a recent appearance on NHL Network, Elliotte Friedman dropped some new information that certainly makes any trade for Kane more difficult.

“The plan is [Kane] and (Jonathan) Toews will meet with the Blackhawks early in the new year and start to go over teams that interest them,” Friedman said. “I always believed the Rangers and Kane were a marriage that made a lot of sense. But if the Rangers don’t get going, I wonder if it makes sense. It might not because you’re going to have to sign him, not just rent him.”

Kane, 34, is the type of player a Stanley Cup contender dreams about adding at the deadline. He knows what it takes to win having lifted hockey’s ultimate prize high overhead three times.

Although he’s not getting any younger, the skilled winger has 20 points in 26 games and a chemistry with Artemi Panarin that would give teams fits in the playoffs.

This season, he leads an abysmally constructed Blackhawks team with 20 points in 26 games. He will be a UFA this summer and has a full no-move clause to control where he lands. The Blackhawks will also need to retain 50% of his huge cap hit in order to make a trade work with the Rangers or any contender for that matter.

Prior to Friedman’s comments, Kane was expected to be a pure trade deadline rental. Which means giving up some picks and prospects knowing full well that Kane was likely to walk this summer via free agency.

If the acquiring team has to have an extension in place before trading for Kane it makes a deal much more difficult. That caveat changes the dynamic of trading for a rental into something a different, which would indicate to me a higher asking price by the Blackhawks.

Any thoughts of Kane forcing Chicago’s hands at the deadline to orchestrate a trade only to the Rangers, similar to what Claude Giroux did to the Flyers, is now irrelevant. Hoping to trade one or two first round picks and prospect like Vitali Kravtsov just went out the door. If the Hawks know the Rangers need to free up cap space in order to extend Kane, they’ll ask for Kaapo Kakko, who makes $2.1M, without a doubt.

Should the Rangers trade for Kane?

Many of the teams in the market for Kane are already up against the salary cap this season and will have a hard time adding a potentially big contract for next year. The cap itself is only expected to rise by a million dollars in 2023-24 to $83.5 million before a bigger jump to $87.5 million in 2024-25.

The Rangers outlook isn’t great for next season to add Kane in a trade and extend him right afterwards.

While Sammy Blais ($1.525M), Jaroslav Halak ($1.5M), and Jimmy Vesey ($750K) all come off the books next season. That’s hardly enough savings to re-sign RFA’s Alexis Lafreniere, K’Andre Miller, and Filip Chytil. Not to mention the need to replace players you lose to have a competitive roster.

That means the Blueshirts will need to trade a player like Barclay Goodrow, who makes $3.6M and has a modified no-trade clause, in the offseason. And that may still not be enough!

By the way, does anyone even know what Kane will ask for in his next deal? If we want to keep using Giroux as a barometer, after he was traded to the Panthers, he bolted for the Ottawa Senators in the summer to the tune of 3-years and $6.5M.

You would have to assume that Kane will garner more.

So will Patrick Kane, who has a full no-move clause stipulate that any trade for him must have a contract extension in place before he accepts? If that’s the case, the number of suitors could dwindle down dramatically.

That may help the Rangers in negotiating the trade package but the ramifications of an extension will make this one of GM Chris Drury’s biggest decisions. 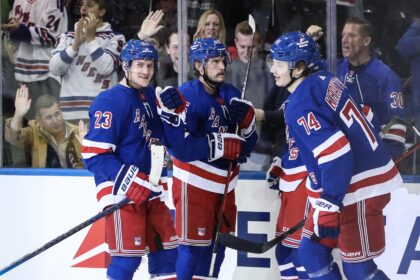