The New York Rangers and Patrick Kane will be an underlying storyline all season. Starting last season, they have been the most rumored destination for the 4-time All Star.

That rumor just received another shot in the arm when top insider, Elliotte Friedman addressed where Kane is most likely to end up on his latest 32 Thoughts Podcast.

“Until proven otherwise I thing the Rangers are the most likely destination,” Friedman said. “Although there’s a lot of variables. We’ve said for months that Kane is going to sit around and see he’s good. If the Rangers are good I can see them being the team.”

Kane, 33, has one year left on a deal that hits the cap at $10.5 million. He registered 92 points in 76 games last season and will return a haul of picks and prospects when he’s ready to waive his full no-move clause.

The mention of the Rangers is not shocking and at the last NHL Trade Deadline, Friedman reported they were in contact with the Blackhawks regarding Kane.

When the time comes, the Rangers may bolster themselves with Kane as a pure rental. They just won’t have the cap space to sign him longterm. That’s where Chris Drury has to be comfortable with what he gives up. The package going the other way will undoubtedly contain a 2023 first-round pick and a prospect like Vitali Kravtsov to start.

Over the summer, The Fourth Period’s David Pagnotta had this to say on NHL Network regarding Kane.

Pagnotta also stated that several teams were already calling about where things stood with Kane.

“We’re hearing noise out of Toronto, Edmonton, Columbus, and a few other teams,” he said. “Dallas has interest and you could add Colorado to the mix, the New York Rangers and so on. One thing is certain, [Kane] has made peace that he’s not going to finish this season with the Blackhawks.”

As of right now, Kane is not going anywhere. General Manager Kyle Davidson made that clear before training camp opened.

For the most part, Kane has echoed similar sentiments as well.

“To be honest, there hasn’t been much discussion about anything, even with my agent or my parents or my family,” Kane told The Athletic (subscription required). “I mean, I think we all know the situation, what could potentially happen. It’s not really anything I’m thinking about as of yet.”

At the end of the day, the entire hockey world believe Kane is going to a contender at the deadline in March. And right now, the most likely destination is Broadway. 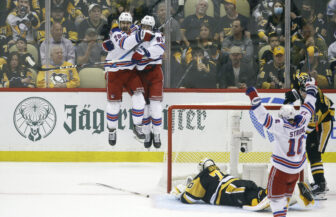