Today is the day! The New York Rangers open the 2022-23 NHL Season at home against the Tampa Bay Lightning.

A rematch against the team that ousted them in six games at the Eastern Conference Final to leave a very bad taste in their mouths. It did something else too, made them hungry to not only get back there but win the Stanley Cup.

“The hole in my résumé is not winning the Stanley Cup,” Chris Kreider told the NY Post. “And I’m going to do everything in my power to rectify that this season.”

As the quest begins tonight for this slightly tweaked version of the Blueshirts, let’s breakdown the competition in the Metropolitan Division and predict where he team will finish.

New York lost valuable forwards to free agency when Ryan Strome, Andrew Copp, Frank Vatrano, and Tyler Motte signed elsewhere. In truth, the Rangers were up against the cap and were limited in what they could do this offseason.

The Rangers were able to snag one of Carolina’s top point producers in the offseason, signing 29-year-old forward Vincent Trocheck to a seven-year deal on the first day of free agency. He will slot into the second line center spot to replace Strome. Despite not clicking in preseason, both he and Artemi Panarin are expected to play a big role in the offense this year.

“We’re learning a lot about each other and our tendencies,” Trocheck said. “We had a lot of chances. Didn’t get a lot into the net. But it’s nice to get those two games with me and Bread out of the way to learn a few things about each other.”

Head coach Gerard Gallant will be banking on kids Alexis Lafrenière, Vitali Kravtsov, and Kaapo Kakko taking the next step within the organization. Both Kravtsov and Kakko signed extensions in the offseason and are opening the season on the first and second line right wings respectively.

Those changes aside, the Rangers are stacked with offensive talent including the duo of Mika Zibanejad and Chris Kreider, who scored 52 goals last season.

Ryan Lindgren cemented his reputation as a warrior battling through injuries in the postseason. And the third pair defense will have two pairs of young fresh legs in Zac Jones and Braden Schneider. Both compliment each other’s styles with Jones being the more offensively gifted and Schneider playing a hard-hitting stay at home game.

At the end of the day, the Rangers will edge out the Carolina Hurricanes for the division title thanks to reigning Vezina winner Igor Shesterkin. Along with capable backup Jaroslav Halak, the two will challenge for the William H. Jennings Trophy awarded to the goalies (min 25 games) with the fewest goals scored against during the regular season.

Here’ s a quick preview and predictions for the rest of the Metro Division.

The Hurricanes brought in several new players, most notably was 37-year-old defenseman Brent Burns, who spent the past 11 seasons trying to win a championship with the San Jose Sharks.

The Hurricanes didn’t stop with Burns, also adding veteran forward Paul Stastny, who will be counted on to fill some of the void left by Nino Niederreiter, who signed with the Nashville Predators.

Ondrej Kase also joins the forward group for the Hurricanes. He has been productive when healthy, totaling 27 points in 50 games with the Toronto Maple Leafs last season.

Max Pacioretty, a six-time 30-goal scorer in the NHL, also joined Carolina, but he isn’t expected to be healed from a torn Achilles until at least the All-Star break in February.

The biggest question for Carolina remains in goal. Can both Frederik Andersen and Antti Raanta get through a whole season healthy?

At the end of the day, Rod Brind’Amour has all the key pieces to go toe-to-toe not only with the Rangers but the rest of the league.

The Penguins focused their offseason attention on securing some of their best players long term.

They gave six-year contracts to Kris Letang, Bryan Rust, and Rickard Rakell, and inked Evgeni Malkin to a four-year extension.

Tristan Jarry is going to be the key to their success and making the playoffs along with backup Casey DeSmith. It they can be solid on most nights, the Pens have enough firepower to compensate for one or two bad goals a game in the regular season.

Pittsburgh is a win-now team and hoping to get captain Sidney Crosby one more Stanley Cup before his career is over. He’s got three years left on his contract and has openly stated he will decide then if he will retire or continue playing.

The Capitals made the biggest move in the NHL involving goaltenders in the offseason.

They signed Darcy Kuemper to a free-agent deal after he helped the Colorado Avalanche win the Stanley Cup last season. Kuemper, 32, didn’t show any signs of slowing down last season, posting a .921 save percentage and five shutouts, both ranking in the top five in the NHL.

Will it be enough to keep the Caps in the playoff picture? I believe so.

The ageless wonder, Alex Ovechkin will be looking for another 50 goal season as he continues to chase down Wayne Gretzky’s all-time goal mark.

Center Nicklas Backstrom will miss the start of the season due to hip surgery. How the Caps hold up in his absence will determine if they make the postseason or not.

Once Tom Wilson (ACL) and Backstrom return, I expect the Caps to make a push for a Wild Card spot.

Here’s my boldest prediction for the Metropolitan Division…the Columbus Blue Jackets could be the dark horse to make the playoffs.

Columbus had a big offseason, beating out a number of other teams to sign six-time All-Star Johnny Gaudreau, who had career highs of 40 goals and 115 points last season for the Calgary Flames last season.

In addition, they also extended Patrik Laine and have some young forwards turning heads. Yegor Chinakhov and Kent Johnson will give the Jackets a real lift offensively this season.

Elvis Merzlikins leads the way in goal for the Jackets. The defense is also solid with Zach Werenski anchoring a young blue-line.

If they can get out to a fast start and stay healthy, I really think they could keep pace and possibly beat out the Capitals for a wild card spot.

The New York Islanders biggest change this offseason has to be considered a downgrade after firing Barry Trotz and replacing him with assistant Lane Lambert.

In reality, Lambert’s promotion actually means very little to no change in systems and playing style for the Isles. That’s either going to be a good or bad thing by season’s end.

Personnel wise, the Islanders missed out on bringing any notable free agent but were able to lock up Mathew Barzal longterm to the the tune of $9.15M AAV for 8 years.

There was a lot of housekeeping this summer with new contracts for Noah Dobson and newly acquired Alexandar Romanov.

Unfortunately, the Islanders inability to bring in offensive help for Barzal and Anders Lee will mean another season out of the playoffs. Their only hope is that Ilya Sorokin has a season for the ages and steals plenty of low scoring games.

John Tortorella is now the new head coach of the Philadelphia Flyers.

That’s great for the longterm aspirations of the franchise but it won’t be enough in a stacked Metropolitan Division to make the playoffs.

Philly added Tony DeAngelo to help their power play and they’re hoping Owen Tippett, who was acquired in the Claude Giroux trade is a top six forward. Most importantly, the Flyers want to know if Kevin Hayes can lead this club and if Carter Hart can find his game under a more defensive minded Torts.

However, what this season will be about is weeding out the players that the organization doesn’t think can cut the mustard.

The New Jersey Devils lured Ondrej Palat from the Tampa Bay Lightning with a five-year deal. Palat comes from a winning organization and tends to step up his game in the postseason, if the Devils can get there.

That’s the real question and why Lindy Ruff could be the first head coach let go this season.

One thing is certain, the Devils are fast and fun. Jack Hughes is a rising star and he’s got players like Jesper Bratt, Dawson Mercer, and Dougie Hamilton to support him.

The problem is their overall defensive game is an issue and without elite goaltending that will put them on the wrong side of the score more often than not. 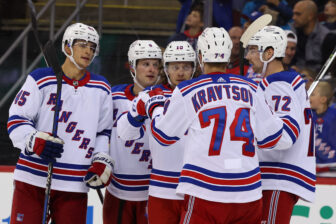