For good measure, the Rangers sturdy defense also stopped the red-hot Mitch Marner and ended his point streak at 23 games.

It was one of the team’s best performances of the season as they took down the Maple Leafs 3-1 and extended their own winning streak to five games.

For Igor Shesterkin, who upped his record to 15-4-4, it was his fifth straight win and also his sixth straight with a point. During this 5-0-1 stretch, the reigning Vezina winner has a GAA of 2.10 with a .903 save percentage.

“Our goalie was one big reason– he played amazing and bailed us out we he needed to,” defenseman Braden Schneider said. “I thought man to man we worked to together and we worked quick. We kept it out of our end as much as we could.”

The Rangers started the game with a big power play goal from their second unit just 3:52 into the match to set the tone. Filip Chytil, who scored the overtime goal against New Jersey, converted a great set of passing plays that had Leafs goalie Matt Murray diving in desperation to stop a shot that went top shelf.

With that goal, it gave him 3 in the last four games. It was also Chytil’s 15th point of the season putting him on pace for 53 which would easily surpass his career high of 23 in 2019-20.

“You have to stay confident even in bad moments,” Chytil said of his play. “It turns into the positive stuff and I’m happy with the consistency.”

The real hero of the game turned out to be Jimmy Vesey, who played one season with the Leafs in 2020-21.

His fourth goal of the season broke the tie in with 4:27 remaining in the middle frame. Vincent Trocheck, who finished the game with 2 assists and has 7 points in his last five games, passed it up to Vesey and watching him score a beauty over Murray’s glove.

Vesey would score the empty net goal with 73 seconds left to seal the win and earn his fifth goal and eleventh point of the season.

“They’ve been rolling and it’s definitely a quote-unquote measuring stick game,” Vesey said via NHL.com. “We were feeling good about ourselves too. I think it’s a big win for us knowing how we have to play to win those big games.” 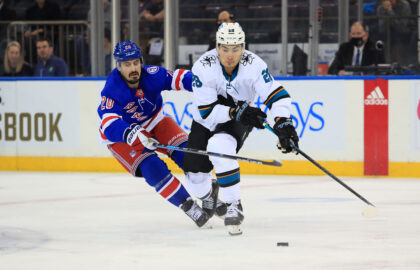 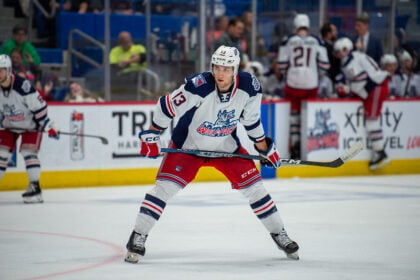 Also Read:
Rangers prospect Will Cuylle working towards a call up