The NY Rangers are certainly writing out a list of potential trade candidates for themselves. Most assuredly on that list are two needs, a top six forward and a veteran left defenseman.

You know that Patrick Kane sits atop the names GM Chris Drury has penciled into his notepad. I can also see Bo Horvat, Vladimir Tarasenko, and Timo Meier on it. When it comes to defense, the Rangers may be eyeing Joel Edmundson or Dmitry Kulikov for a deep playoff run.

However, just like many contending teams they’re up against the salary cap and won’t be able to make a move until they get closer to the trade deadline on March 3.

At this time, the Blueshirts have $1.6 million in cap space per CapFriendly. Should they have that much come the deadline, it means they could take on around $7 million in salary without having to trade a player from their roster.

NY Rangers and other contenders up against it

This week, the NHL held a Board of Governors meeting in Florida. Many general managers anonymously gave their thoughts on the current trade market.

“What kind of calculator are you using?” Sportsnet’s Elliotte Friedman was told by one GM. “None of this stuff is mathematically possible.”

Another GM summed up the situation to ESPN’s Greg Wyshynski and Emily Kaplan: “It’s impossible to get a trade done right now. Nobody can get anything done.”

As of right now on CapFriendly, 22 out of 32 teams have less than a million dollars in cap space. They include top contenders like the Bruins, Golden Knights, Maple Leafs, Avalanche, Penguins, and Stars.

All those teams will be active at the trade deadline looking to plug holes and make a run for the Stanley Cup.

The teams that do have cap space today are basically your sellers. Coyotes ($18M), Ducks ($13), Blackhawks ($5M), and Senators ($2M) should all be looking to move key veteran pieces in March.

So don’t expect a trade now unless the Sabres, who have $16 million in cap space decide to pay the price to land defenseman Jakob Chychrun from the Coyotes tomorrow.

Thanks to the flat cap and the current parity in the NHL, general managers are probably bursting at the seams to make a trade. All this is potentially leading to one of the craziest and busiest trade deadlines in recent memory.

When the time comes, the Rangers are poised to pounce if they can take on $7 million in salary. That makes acquiring Patrick Kane’s $10.5 million contract at 50% salary retention possible.

Considering that some salary is likely to be shed in that deal, adding a defenseman like Edmundson ($3.5) or Kulikov ($2.25) is extremely plausible as well. 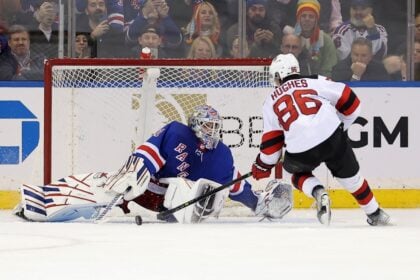