The New York Rangers didn’t bomb on this test, but they still failed.

Facing a Boston Bruins team that played the night before, the Rangers had a coverage lapse less than two minutes in which had them chasing the rest of the game.

“I thought we played a good game for 55 out of the 60,” Gerard Gallant lamented. “Then we played real bad and gave up goals that shouldn’t happen… Again, we give up those easy goals and you can’t do that. And they’re not goaltending easy goals, they’re defensive zone and odd man rushes.”

This was certainly a better effort than the 5-2 loss against the Bruins at the Garden on November 3. At the time, the Rangers were meandering around .500 to start the season, but coming into this contest they’ve been on a good roll with 14 wins since December 3.

Boston got on the board just 79 seconds into the game after a turnover led to David Pastrnak’s point shot being deflected by an uncovered Pavel Zacha.

The goal immediately changed the mood for the home crowd, but an impressive 5 on 3 penalty kill got them back into. Unfortunately, the Rangers failed to build off the momentum and struggled to generate many high danger chances as the Bruins kept them to the outside.

In the second period, another Rangers turnover near the the offensive blue line started an odd man rush the other way. Brad Marchand connected with Patrice Bergeron, who snapped a wrist shot over Igor Shesterkin for a 2-0 lead.

Again, the Rangers power play failed them with an 0-3 night. When they did get a great opportunity, Jeremy Swayman was there to make the big saves.

Any hopes of a comeback were dashed 28 seconds into the third period. Marchand capitalized on yet another odd man rush by finding Connor Clifton near the net for an easy goal.

Defenseman Ben Harpur broke the shutout with 4:23 remaining by whipping a shot from the boards as Filip Chytil provided the screen.

Shesterkin made 24 saves in the losing effort as the Rangers are now 14-4-2 in their last 20 games.

“We could probably learn a thing or two from what they did,” Mika Zibanejad said. “We’ll learn from this and move on… We’ve got to keep playing our game and progressing every day.”

The Rangers are now off for three days before taking on the Florida Panthers at the Garden on Monday night. 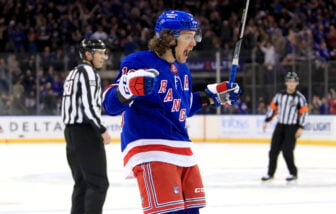