The NY Rangers had countless opportunities to increase a lead they forged just 22 seconds into the game on a goal by Chris Kreider. However, Pittsburgh Penguins goalie Tristan Jarry buckled down and stopped 26 of the next 27 shots for a 3-2 victory.

Goalie heroics aside, it was uninspired and undisciplined play in the last 8-10 minutes of the second period that led to the end of the Blueshirts winning streak. Two power play goals gave the Penguins a lead heading into the third period and all but sealed the Rangers’ fate.

Things looked so promising to open up the game after a big Igor Shesterkin save off Rickard Rakell went immediately the other way for a Rangers tally just 22 seconds into the match.

Pittsburgh native, Vincent Trocheck set up the play that Kreider finished for the 1-0 lead.

New York continued to press only to watch Jarry come up big time and time again. A few crossbars and posts were added for good measure before Pittsburgh shifted the momentum with a power play goal by Evgeni Malkin with 5:36 remaining in the second period.

An undisciplined punch by Sammy Blais to the face of Brock McGinn led to a Bryan Rust goal on the ensuing man advantage with just 13 ticks on the clock. Blais was benched for the rest of the game after that roughing call.

The eventual game-winner was scored by Sidney Crosby in the third as he finished off a two-on-one with the Rangers pressing for a goal.

Kreider would cut the deficit back to one by completing an odd-man rush with Trocheck just 83 seconds after Crosby scored.

“There’s that one stretch in the second that comes back to bite us,” Kreider said afterward. “That’s a good team. They don’t need anymore help with their transition game and we gave it to them. We lost the special teams battle…it was a pretty tight game.”

The Rangers, who were 0-3 on the man advantage, should have had a power play with 42 seconds remaining. Mika Zibanejad got a step on Brian Dumoulin and was tripped up heading to the net. Referee Wes McCauley opted to swallow the whistle as no penalties were called in the final frame.

“There should’ve been a call on somebody,” Gallant explained. “Whether it’s goalie interference for us or a trip for them. So you make up your mind.”

Shesterkin made 21 saves in the game and took his first regulation loss on the road this season.

The loss drops the Rangers to fourth in the Metro, a point behind the Penguins. They currently hold the first Wild Card spot by three points over the New York Islanders. Both teams will square off before the break on Thursday. 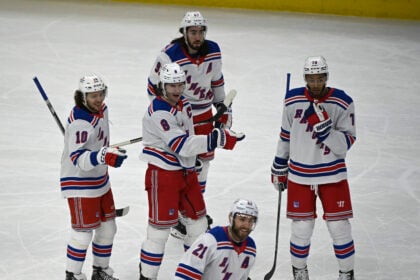