The New York Rangers have officially announced that Jacob Trouba will be the 28th captain in franchise history.

“Since he joined the Rangers, Jacob has consistently displayed all of the qualities we want in a leader on and off the ice,” GM Chris Drury said in a press release. “As we look to take the next step as an organization, he is a role model for all of our players to follow and the perfect choice to be our captain.”

He was acquired from the Winnipeg Jets in exchange for Neal Pionk and a first round pick in 2019. The Rangers then signed him to a 7 year deal with an AAV of $8 million that summer.

The Rangers were close to naming Jacob Trouba captain prior to the 2021-22 season. Instead, Gerard Gallant opted to go with six alternate captains in his first season as head coach of the team citing that it worked for him in Vegas.

Heading into this season, Gallant has made his decision on who should wear the C.

“Right away when I got here, it was clear that Jacob had a certain presence in the locker room and among his teammates that exemplify what you need out of a captain,” Gallant said via the team’s website. “With where our team is at and where we want to be, he is the right person to lead us there.”

Trouba is the first captain of the Rangers since the 2017-18 season, where Ryan McDonagh held the honor for four seasons before being traded to the Tampa Bay Lightning during the rebuild.

He is the 12th defensemen in franchise history to be named captain. According to the team, he’s also the fourth straight American (Chris Drury, Ryan Callahan, Ryan McDonagh) making the Rangers the first NHL team to have four straight U.S. born captains.

A respected voice in the locker room, what Trouba does off the ice is equally remarkable to his performances on the ice. His enthusiastic support of the Garden of Dreams Foundation (GDF) and Junior Rangers Youth Hockey has generated a lasting impact with many tri-state area children. His passion for making a difference in youth communities is consistently displayed with his participation in hockey clinics, Make-a-Wishes, and visits to local hospitals.

The Rangers will now have to decide if they will go with four alternates or reduce it to two. Currently the A’s are Mika Zibanejad, Chris Kreider, Artemi Panarin, and Barclay Goodrow.

If the team keeps all four they could designate two for home games and the other two for road contests.

“It is a privilege and an honor to be named the next captain of the New York Rangers,” Trouba penned in a letter to Rangers fans. “After I was told, one of the first things I did was look up the 27 captains before me. Messier, Leetch, Jagr, and Drury were players I grew up watching as a kid, and I dreamed of being in their skates one day.”

Trouba met with the media today to discuss being named the team’s new captain. During the session, he addressed his belief in the group and noted he spoke with all the alternate captains from last season. In his conversations with them, he stressed that nothing will change with the way they worked together.

Both Chris Drury and Gerard Gallant were in attendance and noted that this was the right time to name a captain. 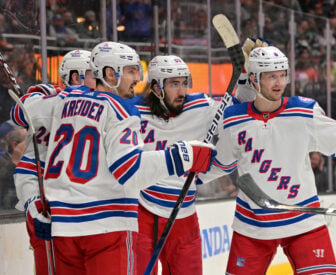