The New York Rangers had a very simple plan coming into the offseason: Sign a second line center and get an affordable backup goalie. They took care of their main goals almost as soon as free agency opened on July 13 by signing Vincent Trocheck and Jaroslav Halak.

Trocheck, 29, registered 21 goals and 51 points last season. He is a two-way player that is built to succeed in the playoffs. The center is expected to replace Ryan Strome on the second line but his signing came at a steep cost.

The Blueshirts inked him to a 7-year deal with an AAV of $5.625M and a no-trade clause for the first three seasons of the contract. It’s imperative with the team having little cap space that his tenure in New York be a success in those first few years.

“It’s an important part of any hockey team and it’s a hole we wanted to address,” said GM Chris Drury about the center position. “[Trocheck] is a real good player, does a lot of different things. We’re excited to have him.”

After signing with the Rangers, Trocheck said it was his top destination. He recently appeared on NHL Network and expanded on his reasonings.

“Obviously, New York has a great team with a lot of young talent,” he began. “Playing against them in the playoffs, they were a tough team to play against with a lot of firepower.”

The Rangers took their second round matchup against the Carolina Hurricanes in 7 games, coming back from a 3-2 series deficit.

“The opportunity to win was one of the main factors and having Gallant there was another factor,” Trocheck continued. “Having the chance to go to New York City and win a Stanley Cup is a huge thing. It’s obviously something I haven’t done yet in my career and I’d like to do.”

Gerard Gallant coached Trocheck for a few seasons in Florida from 2014 to 2016.

It was painful to watch Sammy Blais writing in pain after going down with a season ending injury in November. He and Devils’ defenseman P.K. Subban went into the corner to chase a loose puck and it appeared the defenseman’s skate came out to trip Blais. The fall caused Bias to tear his ACL requiring surgery.

In the end, 4 assists in 14 games is what the Rangers had to show for trading fan favorite Pavel Buchnevich before the 2021-22 season began. The second round pick that was also obtained in the deal went to the Winnipeg Jets to complete conditions for acquiring Andrew Copp.

Now fully healed, Blais spoke with the New York Post to say: “I’m going to be ready to go.”

The 26 year-old showed in his brief stint last year that he has some excellent passing ability. Although Gallant will be looking more for his heavy-hitting style to help the team.

Blais signed a one-year deal in June and the Rangers must see what they have in him before either trading him at the deadline or potentially watch him walk as a UFA next summer.

“I wanted to prove to everyone that they made a good choice trading for me, and it was really, really hard to be away from the team,” Blais said. “I didn’t get as close with the guys as I wanted to, so it was kind of hard for that and being away from the game. But I’m doing good now. I’m just looking forward to get back on the ice with the guys at training camp.”

One thing that will be extremely beneficial for Blais and the team is his ability to play either left or right wing. That will certainly help his cause to stay on the Rangers bottom six. I currently project him as the fourth line left wing this upcoming season. 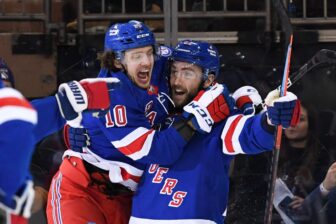