Vitali Kravtsov is ready to make his mark in the NHL and the New York Rangers after a tumultuous few years.

Per Mollie Walker of the NY Post, Kravtsov is in New York ahead of training camp as expected. Back in April, Larry Brooks noted that the skilled winger would start his training in Russia but come here before camp opened to get ready for the upcoming season.

Kravtsov’s situation and fallout with the organization is well documented which includes him twice bolting for Russia after failing to make the team out of preseason action. It was reported that conditioning played a role in the team’s decision last year to send him to the Wolf Pack to get into game shape.

The two sides agreed to hopefully avoid that situation by starting his training early this time around.

The former first-round pick in the 2018 NHL Draft, 9th overall, played 20 games for the Rangers at the tail end of the 2020-21 season. While averaging just 12:24 per night, he scored two goals and added two assists.

Depending on how the Rangers lineup shakes out, Kravtsov appears penciled in as the third-line right wing coming to camp.

Calgary Flames GM, Brad Treliving can’t be enjoying his summer. After telling fans that he would move “heaven and earth” to keep Johnny Gaudreau, only to see sign for less with the Columbus Blue Jackets, he could be losing Matthew Tkachuk next.

Sportsnet’s Eric Francis appeared on ESPN Radio in St. Louis and speculated that the restricted free agent has likely informed the Flames he has no desire to sign long-term. That sparked the team to file for club-elected salary arbitration on Monday to avoid an offer sheet and thus lose him for possibly four first-round picks.

“At the end of the day, the Calgary Flames wanted to buy more time to do the inevitable,” Francis explained. “Which is try to get some significant assets for Matthew Tkachuk and say goodbye to him. I believe this will be wrapped up within the week.”

While Rangers fans may be salivating at the notion of trying to trade for Tkachuk, they likely can’t afford what many expect will be a 7 year-deal with an AAV of around $9 million. The Blueshirts are already top heavy with Artemi Panarin ($11.6M), Adam Fox ($9.5M), Mika Zibanejad ($8.5M), and Jacob Trouba ($8M) to name a few of their big contracts. All except Adam Fox have a full no-move clause.

Not to mention the king’s ransom in assets like Alexis Lafreniere and/or K’Andre Miller the team would have to trade to get him. 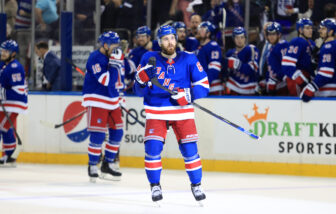 Also Read:
After Rangers sign Kaapo Kakko is there room for Tyler Motte?