Rangers vs Sabres preview by the numbers: Zibanejad cleared as team looks for a win

The New York Rangers will face the Buffalo Sabres for the first time this season. The team is looking to get back on track after having the Leafs snap a 4 game winning streak. Mika Zibanejad is also good to go after a false positive for COVID yesterday.

The Blueshirts are riding a six game point streak against the Sabres (6-0-1). New York has won the last 4 meetings against Buffalo at MSG.

Rangers that can stampede Buffalo:

Artemi Panarin – 19 GP, 8G-15A=23 PTS – Tomorrow will be the 20th time Panarin faces off against the Sabres as he has points in 14 of the previous 19 matchups. Panarin has points in five of his last six games against Buffalo (3G-7A) and is a plus-6 in those six games.

Adam Fox – 10GP, 1G-12A=13 PTS – Fox enters the contest with a six-game assist/point streak against the Sabres (1G-11A); he has posted a multi-assist/point game in four of the six contests. Last season, Fox’s 12 points were the most a Ranger has scored in one season against the Sabres, passing Rod Gilbert’s mark of 11 points in the 1971- 72 season. Fox’s 12 points last season against Buffalo were tied for the second most any one defenseman has recorded against the franchise in a single season (Dave Babych – 13 points in 1987-88).

NY Groove: The Rangers have won 4 straight at MSG and their home winning percentage of .750 is ranked 7th in the NHL.

Atlantic Success: This season, the Rangers boast their best record and goal differential against Atlantic Division opponents at 5-1 scoring 16 GF and 10 GA.

Adam Fox’s 16 points is tied for second for NHL scoring among defenseman with Nashville’s Roman Josi leading with 17.

Ryan Strome has a five game point streak (1G -5A) 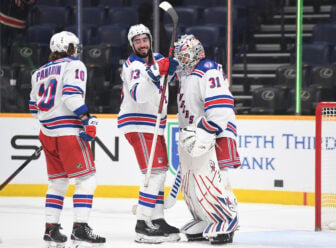 Also Read:
New York Rangers deserve more credit than people have given them this season