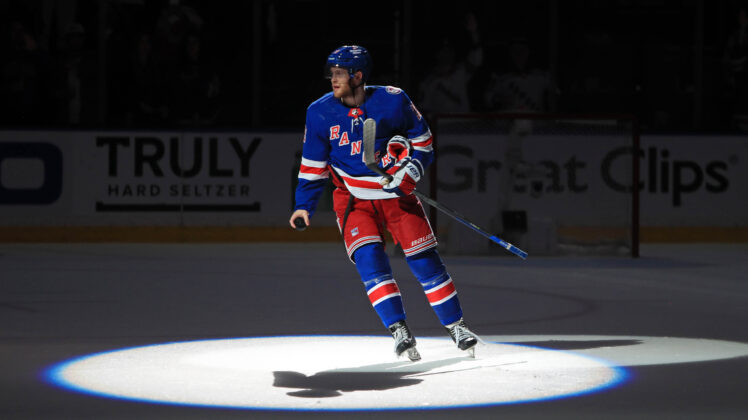 May 24, 2022; New York, New York, USA; New York Rangers center Andrew Copp (18) is acknowledged as the first star of a 4-1 win against the Carolina Hurricanes in game four of the second round of the 2022 Stanley Cup Playoffs at Madison Square Garden. Mandatory Credit: Danny Wild-USA TODAY Sports

The New York Rangers are working on a contract extension for Andrew Copp. I can’t help but think that with their limited cap space, it spells the end for Ryan Strome as Artemi Panarin’s center.

Copp, 27, has been a great acquisition by Chris Drury and fits in nicely because he’s so versatile.

“I try and excel in every way I can,” Copp said. “Versatility playing center, wing, face-offs, special teams both sides, and play strong defensively. Just try and do a little of everything and make the players better around me.”

This past season, he posted 53 points in 72 games with 18 of those coming with the Blueshirts. In the playoffs to date, Copp’s added 5 goals and 10 points in 12 contests. His points per game average is .62 for the last three years.

The Rangers sent prospect forward Morgan Barron to the Winnipeg Jets along with two conditional 2nd-round picks, and a 2023 5th-round pick in 2023. One of the conditional second rounders becomes a first if the team makes it to the Eastern Conference Final and Copp plays in half those games. Two more wins and that will be the case.

“I’m told the New York Rangers are going to push hard – hard – to extend Andrew Copp, we can understand why,” Darren Dreger said back in April. “In Andrew Copp, talk about a chemistry experiment that has been highly successful. Perfect fit with Artemi Panarin.”

Copp is coming off a one-year deal given by the Jets for $3.64M against the cap last summer. His previous deal was for two-years at $2.28M AAV.

This time around, Copp has all the leverage and will be a UFA on July 13. So what will his next deal look like?

For that we should look at a few comps:

Oshie is in the 6th year of an 8-year contract worth $5.75M per season. The 35 year-old posted 25 points in 44 games this past season and is averaging .70 points per game over the last three years.

Verhaeghe recently signed a 3 year extension in the neighborhood of $4.166M AAV. He posted 55 points in 78 games. In his last two seasons with Florida, he’s averaging .75 points per game.

Reinhart, 25, was traded this offseason to the Panthers from the Sabres and promptly signed to a three-year deal worth $6.5M AAV. He had a great season with 82 points in 78 games and helps keep Copp under $6M territory.

The Calgary Flames have been eliminated and speculation has already begun on Johnny Gaudreau and what the team will do this offseason. Read more.