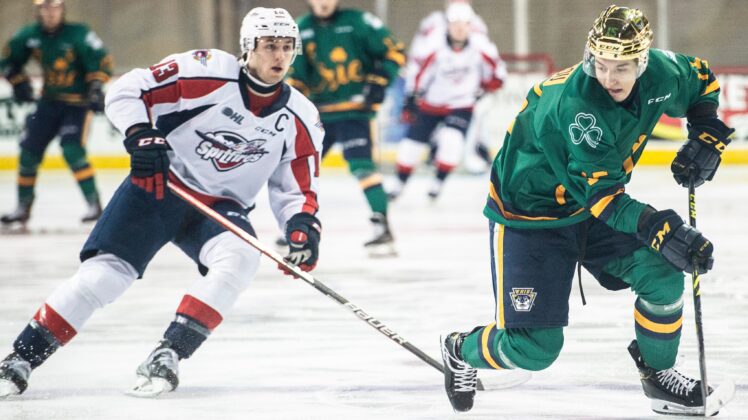 New York Rangers prospect Will Cuylle and his Windsor Spitfires came up just short in their quest for an OHL Championship. The Hamilton Bulldogs became the 2022 Memorial Cup Champions by beating the Spitfires in Game 7 on Wednesday night by a 6-1 score.

Correction: Hamilton won the 2022 J. Ross Robertson Cup and will try and win the Memorial Cup.

Cuylle, 20, did not record a point in the loss but was outstanding as the captain of the Spitfires. In 50 regular-season games he posted 43 goals and 80 points. He added another 15 goals and 31 points in 25 playoff games.

The Blueshirts selected the power forward in the second-round of 2020 Draft. They traded away disgruntled prospect Lias Anderson to the L.A. Kings in order to make the selection.

“The way I play, fast and physical is important on any line to get in on the forecheck,” he said after being drafted. “Separate guys from the puck and make simple plays…so whether that’s me being on the 3rd of the 4th line as an energy guy or on the first or the second line scoring goals using my body strategically.”

In 2021, the 6-3, 212 lbs forward was invited to camp and impressed. Cuylle was extremely noticeable showing a willingness to use his size.

“I want to make the team,” he said in September. “I’m just taking it one day at a time and trying to do my best every day so the coaches know what I can bring.”

Although he certainly could’ve held his own, the Rangers opted to have him continue his development in the OHL. That was a wise decision as Cuylle had a breakout season that started with the Spitfires naming him their captain.

“It is an honor to be named the captain of such a historic franchise,” Cuylle said via the OHL website.

The choice was a good one as he led Windsor all the way to Game 7 of the Championship Final.

Look for Cuylle at Training Camp again come September. With a cap hit of just $902,500, he may just be an extremely affordable option on the bottom six.

Rangers 2021 first-round pick Brennan Othmann has been named to Team Canada’s National Junior camp roster. He will be competing for a spot to play in the 2023 World Junior Championship.

The 19 year-old had an amazing season for the OHL’s Flint Firebirds that included being named captain.

“Obviously it’s a tremendous honor to be named the captain here in Flint,” Othmann said in a team statement. “To follow in the footsteps of Delly (Ty Dellandrea) is special. I’m appreciative of the coaching staff, front office and of course my teammates for trusting and believing in me to step up in this role.”