The New York Rangers announced on Tuesday that they have called up Wolf Pack captain, forward Jonny Brodzinski. In addition, defenseman Zac Jones has been sent down to the AHL.

Brodzinski is the leading scorer of the Wolf Pack and was recently extended by the Rangers for two more years.

New York Rangers announced on Tuesday afternoon that the club has recalled forward Jonny Brodzinski from the AHL’s Hartford Wolf Pack. In addition, the Rangers have assigned defenseman Zac Jones to the Wolf Pack.

Jones, selected in the third round (68th overall) by the Rangers in the 2019 NHL Entry Draft, has skated in 27 games with the Wolf Pack in his rookie professional season. Jones has scored 18 points (4 g, 14 a) with the Pack in 2021-22. He currently leads all Wolf Pack defensemen in overall scoring.

It’s an interesting move because the Rangers had13 forwards already here with Kaapo Kakko remaining on IR. They now have 14 forwards and 7 defensemen with Jones going to Hartford and Brodzinski joining the big club. There was no indication of an injury at practice on Tuesday.

The NHL Trade Deadline is less than 3 weeks away.

Related: Filip Chytil will return to the lineup

An NHL player agent who represents more than 75 percent of the league’s Russian and Belarusian players said his clients are facing “disturbing levels” of harassment over their home country’s invasion of Ukraine.

Dan Milstein, himself Ukrainian by birth, made the comments during an interview with ESPN on Tuesday.

“The discrimination and racism these Russian and Belarusian players are facing right now is remarkable,” Milstein told the network. “My own childhood home is being bombed as I speak to my friends back home. … But people are picking on the wrong crowd. I can speak on behalf of my clients: They want world peace like everybody else. They’re not being treated like that.”

Milstein represents clients such as Nikita Zadorov, Nikita Kucherov and Andrei Vasilevskiy and Ilya Sorkin. The Moscow-born Zadorov, for one, spoke out against the invasion on social media.

Milstein, who immigrated to the U.S. in 1991 and is now a U.S. citizen, further alleged that draft-eligible Russian players are being discriminated against.

“Some hockey executives have already expressed concern in the upcoming draft whether those players will ever be able to come out (of Russia) and play, and some of them are concerned about the public opinion when certain players are drafted,” Milstein told ESPN. “I try to understand the teams, and of course public opinion matters, but this is pure discrimination. And these are young men’s lives we’re talking about. Innocent young men who are now being punished.”

The Rangers currently have two Russian-born players on their roster in Artemi Panarin and Igor Shesterkin. Alexandar Georgiev was born in Bulgaria but moved to Moscow at an early age, his mother is Russian. 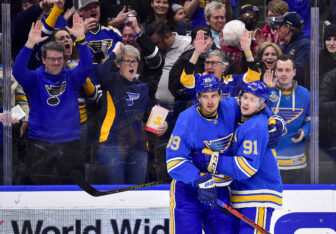 The Ranger are faced with a big decision regarding J.T. Miller, plus Ducks won’t let free agents walk. Read more.