The New York Rangers have hit a rough patch with two straight losses to the the Penguins and Canucks where they mustered only two goals. Scoring has been a problem for most games this month which continues to heighten awareness as the NHL Trade Deadline is less than a month away.

Down on the farm, the Wolf Pack are having a good season led by their captain Jonny Brodzinski. The Rangers recognized his contributions with a new contract extension on Monday.

New York Rangers President and General Manager Chris Drury announced today that the team has agreed to terms with Jonny Brodzinski on a two-year contract extension.

Brodzinski, 28, has split his 2021-22 season between New York and the Hartford Wolf Pack of the American Hockey League (AHL). With the Blueshirts, he has played five games and recorded three shots and plus-1 rating. In Hartford, Brodzinski has recorded 18 goals and 21 assists for 39 points in 36 games. He leads the Wolf Pack in goals and points and ranks second in assists.

In The Daily Goal Horn’s latest NHL Power Rankings, the Calgary Flames have been scorching hot as they’ve dominated in the month of February. After two months outside the Top Ten, Darryl Sutter has his charges leading the Pacific Division on the strength of a 10-1 run heading into March.

New York Rangers: The Rangers dropped this month after going 4-2-1. However, as long as Igor Shesterkin is healthy they’re likely to remain in the top 10. If they can land some help at the trade deadline, that may help them move up.

Per the website MoneyPuck, the New York Rangers chances of making the playoffs has jumped up since last month from 92.6% to 98.2%. Some additional odds have them a 1.6% to win the Metro, and a .4% chance of winning the Cup.

Taking a look at some of the Power Rankings around the league, the Blueshirts appeared to fallen a notch or two down many charts.

Here’s how they’ve moved in rankings from the last time we checked in January to February:

Ryan Strome really found himself with the Rangers when he was traded there from Edmonton in 2018 and has really found his game offensively since the move. He’ll turn 29 just days before free agency opens.

New York can handle the pressure of a tight game. This season, the Blueshirts have led the league in one-goal victories with 16. Igor Shesterkin’s Vezina Trophy-caliber season definitely helps with that. 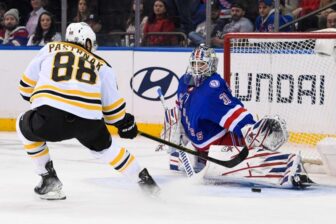