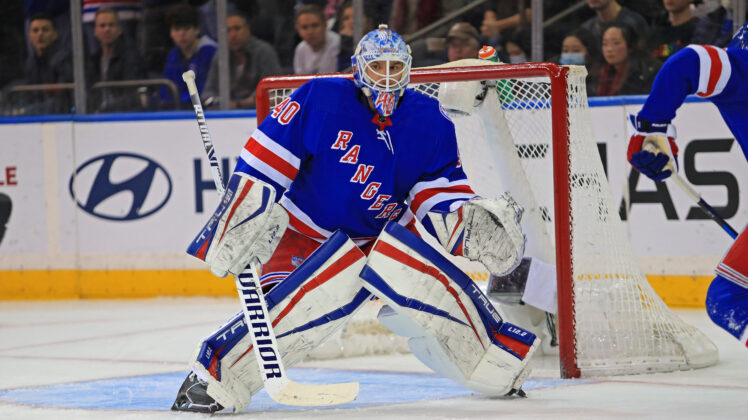 The New York Rangers will start Alexandar Georgiev in the second game of a back-to-back. Puck drop is set for 7:30 PM ET against the Vancouver Canucks with the Blueshirts looking to get back in the win column.

Yesterday, Tristan Jarry came out on the winning end of a goalie duel with Igor Shesterkin. Pittsburgh managed to score on a third period power play to get two points and jump over the Rangers for second place in the Metro by one point.

Alexandar Georgiev starts versus the Canucks

The goalie has been the subject of trade rumors in recent weeks with at least two teams having contacted the Rangers about his availability. Both the Golden Knights and Oilers inquired but neither offered anything more than a third round pick, which GM Chris Drury turned down.

Georgiev has lost his last three starts and will look to get back in the win column himself. His last victory came against the Anaheim Ducks on January 8. He’s 0-1-0 for his career against the Canucks with a .926 SV% and a 2.05 GAA.

It was revealed after the Rangers 1-0 loss to the Penguins that Filip Chytil was healthy enough to play. Instead, Gerard Gallant opted to stay with the same lineup that beat the Washington Capitals the game before, which had Morgan Barron in his Chytil’s place.

“He was fine,” Gallant said yesterday. “Just the team played really well the night before (against Washington).”

Kaapo Kakko is still on IR with an upper-body injury for another three weeks, so you’d think Chytil would be in the lineup. Especially considering the team was shutout and could use some offensive help.

Apparently, that isn’t the case as Gallant noted Chytil “probably” won’t play against the Canucks.

“He’s probably not playing tonight, but it has nothing to do with him,” he said. “It’s about the guys that played well and that’s why I’m not changing the lineup.”

Chytil may be trade bait

Chytil, 22, was drafted in the first round of the 2017 Draft (21st overall). He continues to struggle to find his game with just 12 points in 41 games. Over the last five years, he’s been bounced around the lineup playing center or right wing with neither seeming to be a fit.

Despite talks that Chris Drury may deem Chytil as someone he’d rather not trade because the team does not have many centers, I believe he is very much on the block for the right deal. I expressed as much over at The Daily Goal Horn where I placed him on our NHL Trade Bait Tracker along with three other Blueshirts.

With the deadline less than a month away, one wonders if he isn’t being held out of the lineup to protect against injury in order to not jeopardize a possible trade.

Did I mention J.T. Miller is in town tonight?