Rangers Roundup: Will loss of Kakko expedite a trade, players happy for break, and more 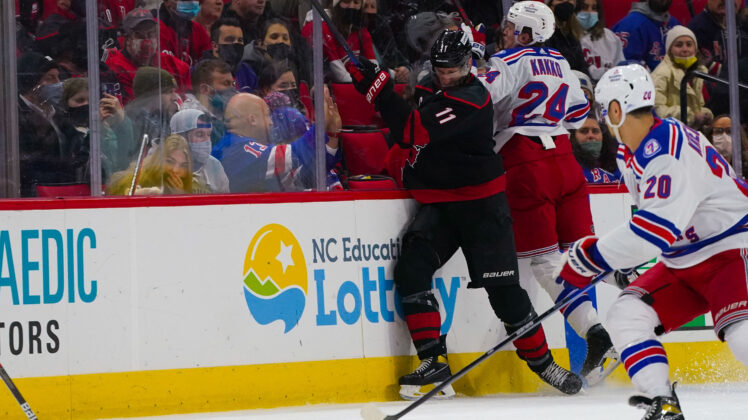 The New York Rangers will be without their only legit top-six right wing candidate for at least three to four weeks. Kaapo Kakko, who has been on IR with an upper-body injury since 1/22 will remain out of the lineup.

The question this now raises is if Chris Drury will try and pull a deal to fill a growing hole. While Gerard Gallant can place left wings Chris Kreider or Alexis Lafrenière on the right side on the first line, Dryden Hunt on the second line isn’t exactly optimal.

Rangers Kakko out at least a month

“He’s going to be out for awhile,” Gallant told the media on Friday. “Probably at least a month.”

Kakko, 20, last played on January 21 against the Carolina Hurricanes. Television cameras caught Kakko wincing in a lot of pain and discomfort at the end of the second period as he was flexing his shoulder and chest area. He was placed on IR the next day with the hope of returning after the All-Star Break.

This injury will basically mean a Kakko return would almost align with the NHL Trade Deadline on March 21. Can the Rangers really afford to go through such a critical stretch of the season without at least one natural top right wing?

Between now and the deadline, the Rangers have 16 games to play. Five of those games are against current East playoff teams with another five against West playoff teams. That’s a tall ask even for a solid team like the Rangers to keep going with such a glaring hole.

While some may not see it as such a big issue since Kakko wasn’t exactly tearing it up with just five goals and 14 points in 37 games, he was still playing well defensively.

“He’s a good defensive player, he’d just like to score more,” Gallant explained. “We like his game and the way he’s going.”

There was some hope that Reilly Smith would soon be available out of Vegas with Jack Eichel coming off IR in about a week or two. However, if Mark Stone’s back issue lands him on LTIR, Vegas will not have to trade him.

So the question now turns to who else will the Rangers look to if one of their top options is off the table. Chris Drury is believed to have little interest in Coyotes’ Phil Kessel, but his current available options are limited.

The Rangers got back to work yesterday in what Gallant called more of an informal skate. Mika Zibanejad did not skate but will be on the ice today.

“Happy to be back,” Jacob Trouba said. “Now you turn the page back to hockey, but it definitely was good to get a mental break. As much as the physical, mentally is even more important for me. I think probably for a lot of guys the mental break was good.”

“Our schedule probably couldn’t be any better,” Ryan Strome admitted. “Honestly, mental and physical break like Troubs said is huge. I think just refresh for the final stretch here and get a few practice days to get back into it and ramp it up a little bit day-by-day which is nice rather than having to hit the ground running and potentially be sore. Build up and be ready for a big game against Boston.”

The talked did turn to their All-Star and leading goal scorer Chris Kreider as he chases the Maurice “Rocket” Richard Trophy for NHL’s top goal getter.

“Get him the puck. He knows what he’s good at,” Strome said. “He keeps it simple, with the five or six things he does and he’s really good at them. Find him and he knows how to execute.” 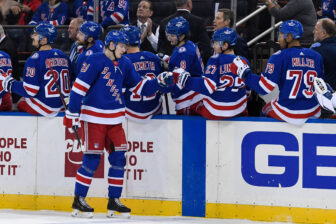