The New York Rangers have finally taken the ice for practice since they last played on February 1. That was a 5-2 win against the Florida Panthers before the All-Star Break.

Prior to hitting the ice, the team announced the recall of forward Morgan Barron. In addition, Larry Brooks is reporting that Kaapo Kakko will remain sidelined. No timeframe for return has been provided as of yet.

The Rangers roster has 21 of 23 spots taken with the recall of Barron. Patrik Nemeth, who has been out for personal reasons and is on the non-roster, is skating with the team today.

Once activated, he will be the team’s 7th defenseman. That leaves one spot left for Kakko when he comes of IR, but depending on how long he is out another Hartford call up is expected.

Filip Chytil, who was a game-time decision against the Panthers is skating as well. He’s been out since getting injured against the Coyotes on 1/22.

Adam Fox, who was recently taken off IR is also a full participant.

During the Rangers loss to the Hurricanes (1/21), cameras caught Kakko wincing in a lot of pain and discomfort at the end of the second period. He could be seen flexing his shoulder and chest area. He was placed on IR soon afterwards.

According to head coach Gerard Gallant, he expected Kakko to return to the lineup after the All-Star break. After practice, Gallant will likely provide an update today. 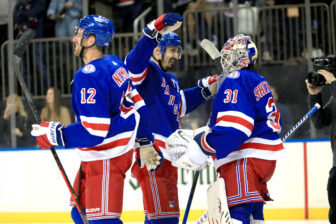 Barron, 23, has 1 assist in 9 NHL games this season. The forward has been as a center and wing with the Rangers this season. His versatility makes him an asset for the third and fourth line.

In his limited action with the team this season, Barron has lived up to his billing as a good face-off man. He’s taken a total of 37 draws winning 23 of them for a 62.2 face-off winning percentage. 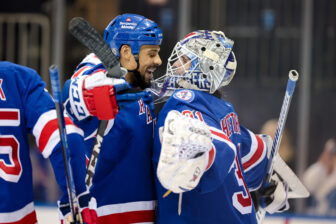 The Oilers are looking for defense. San Jose is trying to keep Tomas Hertl, and more NHL rumors here.