Rangers Roundup: Forsberg available, Georgiev trade, Jones up, and Barron in vs Caps 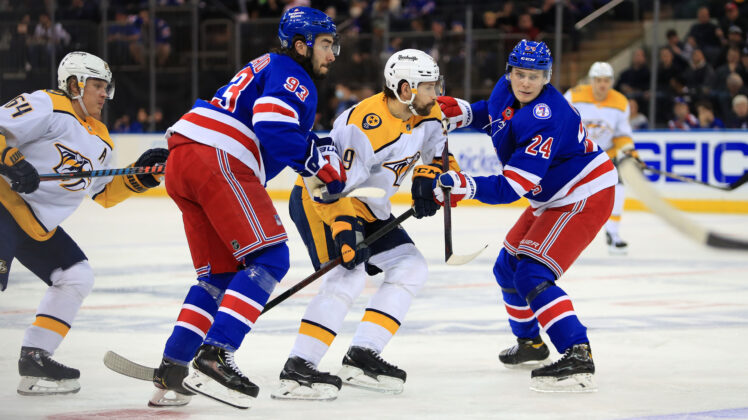 The New York Rangers and the NHL Trade Rumors mill are going to be fun for fans and hockey writers alike. Speculation at this time of the year is going to run rampant among almost every team.

Every year, as the Trade Deadline approaches, teams fall into three buckets; buyers, sellers, and undecided. The market follows the laws of supply and demand, more sellers than buyers and the price goes down. This season, there seems to be more buyers than sellers at the moment which is why Montreal is asking for a first round pick and a prospect for Ben Chiarot.

A definite overpay, but one a team will give if he’s really all that’s available on defense.

An old name that I once discussed as a possible trade option for the Rangers is new again.

Thanks to a report from Andy Strickland, the Nashville Predators are “actively shopping” pending UFA forward Filip Forsberg.

The 27 year-old is in the final year of a six-year contract agreed to in 2016-17. That deal was for $6M AAV against the cap and his next one is expected to be much higher. This season, he’s scored 44 points through 38 games.

Just keep in mind that there were plenty of earlier reports indicating that two sides would be meeting to discuss an extension. This could just be due diligence by the Predators, so I wouldn’t call him officially “on the block”

Is he a fit for the Rangers as a rental this season? That’s the question to ask and despite his goal scoring prowess with 26 goals (22 at even strength) he is primarily a left wing.

The cost to acquire Forsberg would also be extremely high starting with a first round pick and a top prospect. Now, unless you are confident he can play the right wing or center the third line I wouldn’t do it. Plus, giving up a top prospect for someone you know won’t be staying here isn’t worth it.

Yesterday, TSN put out their top 50 trade bait list and Alexandar Georgiev was not only the first goalie on it, he was #8 overall.

Georgiev, 25, is 7-7-2 record with a 2.98 GAA and an .898 SV%. He’s also been on the market since a soft trade request was made this past summer. Everyone also knows that the Rangers will not be able to keep the pending RFA with the inevitable cap crunch once Adam Fox’s and Mika Zibanejad’s extensions kick in next season.

Also, multiple reports indicate that the Rangers have yet to receive any offer GM Chris Drury would consider. Both the Edmonton Oilers and Vegas Golden Knights have reached out about acquiring him in the new year with nothing more than a third round pick supposedly offered.

That’s why I don’t see Drury trading him at the deadline unless he gets at least a second round selection and can secure another back-up like Detroit’s Thomas Greiss for less. The only other way would be if Georgiev was part of a larger package deal that brought in a top six forward.

New York Rangers recall defenseman Zac Jones as Patrik Nemeth is out for personal reasons (wife having a baby). Also, Filip Chytil is out with a non-covid related illness and Morgan Barron is in.

Per the Wolf Pack Release:

The Hartford Wolf Pack were involved in a pair of transactions on Thursday evening. First, the parent New York Rangers recalled defenseman Zac Jones from Wolf Pack. In addition, the Wolf Pack recalled forward James Sanchez from loan to the ECHL’s Jacksonville Icemen.

Jones, selected in the third round (68th overall) by the Rangers in the 2019 NHL Entry Draft, has skated in 27 games with the Wolf Pack in his rookie professional season. Jones has scored 18 points (4 g, 14 a), including his first professional goal, with the Pack in 2021-22. He currently leads all Wolf Pack defensemen in scoring.

Jones has also skated in eight NHL games with the Rangers during the 2021-22 season, scoring an assist. In his career, Jones has skated in 18 total NHL games and scored five assists. 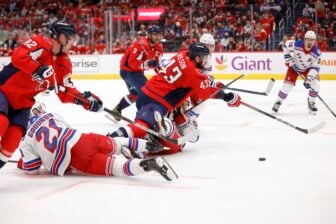