The New York Rangers have had quite the draft history with first round picks. In the last decade from 2010 to 2020, the Blueshirts have made 11 first round selections. They also did not have a first round pick for four consecutive years from 2013 to 2016.

Of the 11 picks made, 7 are still with the organization. Five of those selections are on the current roster, with one in the minors and another sitting in Russia waiting to be traded. The rest have moved on with one a star in Vancouver.

Let’s rank the Rangers first round picks starting at the top with the Blueshirts first ever #1 selection in the modern draft.

Statistically speaking, the 20 year-old from Saint-Eustache, Quebec has a lot to prove. However, prior to being selected by the Rangers, he was one of the most highly regarded prospects in quite a few years. He was the captain of the Rimouski Oceanic in the QMJHL where he registered 297 points in 173 games from the ages of 16 to 18 years old.

Lafrenière has picked up 14 goals and 24 points in his very young 63 game NHL career. This season, he’s scored the game winning goal two times out of the Blueshirts four wins through seven games. He’s projected to be a first line winger in the NHL and he’s well on his way to fulfilling that projection.

This is the one that got away. Miller was a throw in the Ryan McDonagh blockbuster with the Tampa Bay Lightning. A trade that brought back Vlad Namestnikov, Libor Hajek, Brett Howden, and a conditional first round pick that turned out to be Nils Lundkvist.

Miller was actually solid with the Rangers scoring 172 points in 341 games. A Blueshirts career that had him unfairly in Alain Vigneault’s doghouse one too many times. In 223 games since, he has picked up 191 points for the Lightning and Canucks.

The 20 year-old Finn makes my list at number 3, mostly based on how high he was selected and where I believe he’s headed. Kakko’s 19 goals and 40 points in 117 regular season games really doesn’t justify the ranking. However, he’s given us glimpses elite talent to control the boards, skate, stickhandle, and score highlight reel goals.

The kid has also bulked up and looked ready to have a great third season before hitting IR. I look for him to make a difference for the Rangers in 2021-22. He’s simply too talented not to live up to being the #2 pick in the draft.

New York went off the board a few times in the NHL draft the last decade and Chytil was one of those picks. He wasn’t even ranked to be a first rounder, but the Rangers saw size, speed, and skill and went after it.

Filip played his first few games as a Blueshirt at 18 years of age back in 2017-18. Even though it feels like he’s been here forever, the kid is just 22 years-old. In 193 NHL games he has 72 points. This has to be a big year for him, or the next time I do this ranking he will be much lower.

When Skjei first hit Broadway, he was a fan favorite. In his first full season (2016-17) with the Rangers he scored 39 points in 80 games and was named to the ALL Rookie team. Unfortunately, that was the last good season for the Rangers as team in awhile. Age started to show leading to a rebuild and Skjei’s game was impacted.

The Blueshirts received a first round pick in 2020 from the Hurricanes, which they used in a trade to move up and select Braden Schneider. 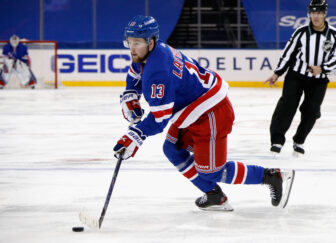 Also Read:
Rangers youngster Alexis Lafrenière says “I have to be better,” he’s not the only one

Rangers first round picks that could climb the list quickly

At 6-5, 210 lbs, Miller is a big package of raw talent. Although he has some struggles in his own end from time to time, the kid is just 21 years-old and only 60 games into his NHL career. Miller has incredible speed for a man of his size. It has aided him well in recovering whenever he makes a mistake more often than not. In his first season, he made the All Rookie Team and his future is only going to be brighter on both sides of the puck.

The Rangers need Nils to hit here in order to salvage any face on that McDonagh deal we discussed earlier. It’s hard to judge him after just 6 games in the NHL without a point and -3 rating, but he’s a 21 year-old kid trying to adjust to North American sized rinks at the highest competitive level. Still, this is one of the premiere prospects to come out of the SHL on defense in awhile.

One of the WHL’s top defenseman, Schneider plays a heavy game with the ability to score. The Rangers wanted him so bad that they tried to trade up several times to get him and were finally successful when the Flames agreed to make the deal. The 20 year-old had a solid camp but will be seasoning his game with the Wolf Pack for at least this season. 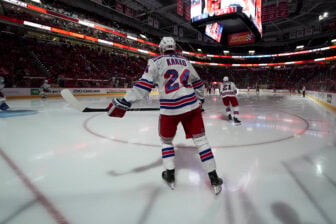 The Rangers went off the board to select Andersson back in 2017. That summer at the WJC, he threw his silver medal into the stands. A sign of competitive fire or immaturity? For many, it turned out to be the latter.

Andersson’s skating was never up to par for the NHL and he eventually left the Wolf Pack to go home to Sweden seeking a trade. That request was granted almost a year later when he was moved for a second round pick, which was used to select Will Cuylle.

Lias’ Rangers career finished with just 9 points in 66 games. He currently has 6 points in 23 contests with the Kings.

Kravtsov was another off the board selection for the Blueshirts. Sorry, but you simply don’t take that many risks in the first round. The Rangers passed on Oliver Wahlstrom, Noah Dobson, and Joel Farabee to pick the skilled Russian winger. Since being drafted, we have as many leaving the team to go back home as we do NHL goals with two. Kravtsov will be traded, and I highly doubt it will be for anything more than what was received for Andersson.

It’s a shame really, because Kravtsov has excellent hockeyIQ with the skills to match.

By far not the Rangers worst ever first round pick. That honor belongs to Pavel Brendl, who was taken 4th overall in 1999. McIlrath just never panned out to be the big physical defenseman he was projected to be. Yes, he could fight, but that was about it.

The biggest issue, and why McIlrath ranks below Andersson and Kravtsov is they traded him away for nothing six years later. McIlrath was traded to the Panthers for journeyman Steven Kampfer and a conditional 7th round pick. And yes, the Rangers could have had Cam Fowler (12), Jaden Schwartz (14), or Vladimir Tarasenko (16) that draft year. 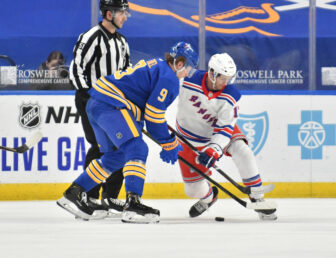