Forever Blueshirts has learned that the New York Rangers first round pick is indeed in play this offseason. On July 23rd -24th the NHL Draft will take place and Chris Drury currently holds the 15th selection after the lottery drawing last week.

The Rangers are no strangers to trading first round picks. Of course, having the #2 pick in 2019 and last year’s 1st overall selection made the decision to keep them even easier. That still didn’t stop them from making a trade involving a first rounder in the right deal in the thick of a rebuild.

In 2019, the Blueshirts traded the #20 pick overall back to the Winnipeg Jets along with Neal Pionk for Jacob Trouba. The pick was acquired from Winnipeg in exchange for Kevin Hayes earlier at the trade deadline.

With the organization moving out of that phase for next season, it makes sense to acquire a key roster piece for assets.

What is the right deal?

From what I can gather, and what many who cover the Rangers believe it is for a center. The pivots they would include the 15th pick for are Jack Eichel or Evgeny Kuznetsov who are known to be available. Should either Aleksander Barkov or Sean Monahan be put on the market, they would qualify.

The Buffalo Sabres are said to be engaged in trade talks for Jack Eichel and several other players according to Darren Dreger of TSN. In a series of tweets this morning, he outlined the latest with Buffalo.

“Aside from the ongoing coach search, NHL clubs are calling Buffalo with interest in a number of players, including Jack Eichel,” Dreger wrote. “Initial conversations that will increase as we get closer to the Draft.”

If the Sabres are trying to punt Jack Eichel’s neck issue and pending surgery, then the return should be considerably less than previously thought. 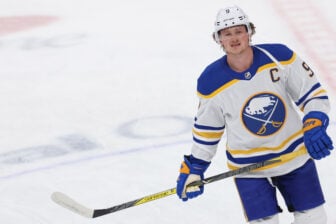 What if they keep the pick?

What if the Blueshirts can’t find or make a trade for a center? Who would they use the pick on? I believe this is a scenario where they should draft for need and not just best player available. If the Rangers elect to keep the pick, they most assuredly will be drafting a center. They may even try moving up a few spots should Aatu Raty be within reach.

The Athletic’s Corey Pronman and Rick Carpiniello selected LW, Brennan Othmann from Flint in the OHL. Steve Kournianos who runs The Draft Analyst website ranks Othmann at 27, so this seems like a reach pick. He calls the smallish power forward, “A nasty in-your-face competitor with a plus-plus shot.”

Over at Sportsnet, Sam Cosentino chose my personal favorite, Fedor Svechkov. “Does Chris Drury at the helm affect whether or not the Rangers go back to the Russian well,” he writes. “If so, Svechkov has size, plays hard and is supremely responsible at both ends of the rink.”

Bottom line, the Rangers are in a great spot whatever they decide to do.

Here are my latest predictions for NHL Awards this summer.