Report: Vitali Kravtsov has returned to Russia awaiting a trade from the New York Rangers

Multiple reports confirm that Vitali Kravtsov has returned home to Chelyabinsk in Russia and is awaiting a trade.

Russ Cohen of Sirius XM also notes that there are around five teams interested in acquiring the 21 year-old former first round pick.

This should probably answer the question if Kravtsov would accept the Rangers invitation to return with a resounding NO.

Latest on the Vitali Kravtsov situation

Kakko was placed on IR today and will miss 7 days. When the team opted to recall Morgan Barron that likely was a clear indication of what Kravtsov’s response would be.

I reached out to Kravtsov’s agent Dan Milstein earlier today to ask about the request but he declined to make any public comments. Lo and Behold, his client had already left for Russia.

Kravtsov, whom the Rangers selected 9th overall in the 2018 Draft wants out so bad that he’s willing to report to any other team’s AHL affiliate. 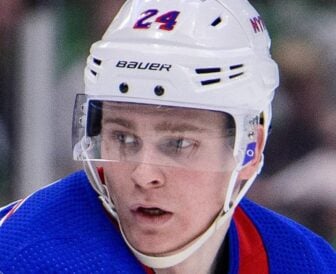 I recently detailed how the Rangers got here with Kravtsov in detail here.

The Rangers wanted Kravtsov to work on his conditioning, which they had concerns with since last summer. His injury during preseason, believed to be a groin, may have stemmed from it. However, Chris Drury was never a fan of the selection in the first place, and there’s now a level of distrust from Kravtsov’s side.

So here we are with the Rangers using their leverage to salvage the situation, but asking for a high and unrealistic return.

Forever Blueshirts has learned that at least three teams have made offers but to this point it hasn’t moved the needle.

A source also detailed for me earlier in the week that the return will most likely be similar to what the Rangers got when they dealt Lias Andersson for a second round pick.

Teams that currently hold multiple second round selections are the Red Wings, Senators, Flames, and Coyotes.