Reuniting Kid Line could be what Rangers need, plus Ryan Lindgren update

The New York Rangers are in search of a spark, anything to get them heading in the right direction to snap this latest losing streak (0-2-1). Head coach Gerard Gallant is the key decision-maker when it comes to how best to utilize his current personnel and today he opted to make more changes.

By the looks at practice, Chris Kreider will go back to the first line with Mika Zibanejad and new winger Jimmy Vesey. The season opening second-line featuring Artemi Panarin, Vincent Trocheck, and Vitali Kravtsov will get another chance as well.

Which means, Kaapo Kakko and Alexis Lafrenière will return to their respective flanks alongside Filip Chytil reuniting the Kid Line.

During the playoffs, the trio of first round picks formed the team’s most energetic line combination. Their shifts often turned the momentum around for the Blueshirts en route to a trip to the Eastern Conference Final.

It now looks like Gallant will turn to these young stars once again to excite his charges out of their doldrums.

Lafrenière, 21, was the most noticeable of the three in the postseason with his physical play and posting 9 points in 20 playoff games. This season, he’s gotten off to a solid start with 5 points in 14 contests as he’s tried to acclimate himself to right wing.

Chytil, 23, found his goal scoring touch in the postseason potting 7 goals, one shy of his regular-season total of 8. Last night, he recorded his first goal since coming back from a concussion and has 4 points in 8 games.

Kakko, 21, struggled to stay in the lineup last season, but looked strong on the puck posting 5 points in 19 playoff games. He’s carried that into this campaign with 6 points in 14 games, mostly on the first line.

“I like to play with those guys,” Kakko said before the season started. “I think we know each other and we play the same style.”

Gallant is hoping that chemistry will rekindle the Rangers fire and get them back to their winning ways as they start a two-game road trip (Detroit on Thursday and Nashville on Saturday).

Ryan Lindgren and Julien Gauthier back

Defenseman Ryan Lindgren was back at practice today and looks cleared to go for Thursday game against the Red Wings.

Lindgren, 24, was enjoying a strong start to the season with 2 assists in 12 games played before being knocked out of the Rangers last game against the Bruins by David Pastrnak.

“I didn’t see him coming,” said Lindgren, who had released the puck to his right before Pastrnak came at him high from his left. “Maybe I should have known he would come at me. I got him pretty good.”

Julien Gauthier also was back at practice and rotating in on the fourth line. Ryan Reaves was skating as an extra per reports and will be scratched for a third consecutive game.

Jacob Trouba was given a maintenance day. 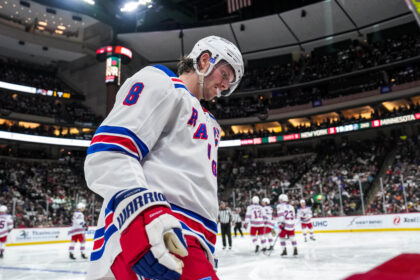 Also Read:
New York Rangers believe in each other, will it be enough?