The New York Rangers have had their fair share of injuries in the NHL this season. Ryan Lindgren is the latest to find themselves needing attention from the team’s trainers and medical staff.

During last night’s 5-2 loss to the Boston Bruins, David Pastrnak caught Lindgren when he wasn’t looking. It was called interference on the ice, as the puck was nowhere near the Blueshirts defenseman. Pastrnak even admitted that he took exception to an earlier hit when speaking with ESPN’s Emily Kaplan.

Lindgren eventually left the game midway through the first period and did not return with an upper-body injury.

Lindgren, 24, is having another fine season with 2 assists in 12 games played. He’s second on the team in blocks with 28 (Jacob Trouba leads with 32) and has 17 hits registered.

He and partner Adam Fox comprise the Rangers top pair defense which was broken up during yesterday loss to Bruins because of the injury.

“If he was able to come back, he would’ve,” said Adam Fox, who is Lindgren’s D partner. “I don’t know what the diagnosis is on him, but obviously, a big loss for us.”

The Rangers next game is Sunday at 5:00 PM ET against the Detroit Red Wings at home.

If Lindgren can’t go, Libor Hajek will be ready to step in for him.

Hajek, 24, has played in 3 games this season and hasn’t picked up a point yet on 4 shots. He’s also been credited with 5 hits and 1 block.

Chytil, 23, last played on October 23 in a 5-1 loss to the Columbus Blue Jackets. On the play, Cole Sillinger’s elbow came up high and struck Chytil’s head. He was on the ice for a few minutes before exiting the game just 2 minutes in.

He’s been out with an upper-body injury since. He has 3 points in 6 games this season.

“He’s been recovering from a concussion,” ESPN Emily Kaplan revealed. “The good news is, he’s feeling a lot better and been a full participant at practice. He’s not quite there yet but I would not be shocked if we see him on Sunday.”

Kaplan’s report came just a few hours after Gallant noted that Chytil wouldn’t play against the Bruins. In his update, he provided very positive news.

Vitali Kravtsov is the other injured Rangers player after hitting his head hard against the boards in Dallas last Saturday. He was immediately taken out of the game and ruled out for the rest of this week with an upper-body injury. 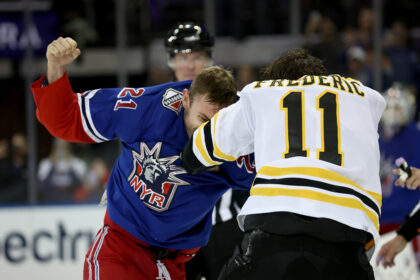