Former New York Rangers forward Ryan Reaves will be returning to Madison Square Garden for the first time since being traded to the Minnesota Wild for a 2025 fifth-round pick on November 23.

When he steps on the ice on Tuesday night, I expect Reaves to be met with with a roar of cheers by the Blueshirts Faithful. It will be a reception well deserved as he was an instrumental part in rebuilding the confidence of the Rangers last season.

Reavo, as he’s affectionately known, had an impact on the ice with his physical play but was even more instrumental in the room. He helped bring a swagger back to a team that watched helplessly when Tom Wilson threw Artemi Panarin around like a rag doll at the end of the 2020-21 season.

When experts questioned their legitimacy early during the 2021-22 campaign, his retort was a simple, “How bout them Rangers?” He was also the greatest hype man pumping up his teammates before, during, and after games.

You have to admit, watching Reavo scream “Shesty! Release Us!” just before the Rangers took the ice got everyone’s adrenaline pumping. Even people at home on their couch.

Reaves, 35, played a total 81 regular season games on Broadway in a little over one season registering 5 goals and 13 points with 55 penalty minutes. He also picked up 5 fighting majors in a Rangers uniform. Unfortunately for him, the Rangers were looking for more speed and cap space in the lineup leading to Reaves being scratched in 7 of 8 games before the trade.

“My wife sent me an article that the Rangers were looking to dump my salary,” Reaves told Wild on 7th. “So I approached [Chris Drury] and asked if there was any truth behind this. We went back and forth and I said listen, ‘Am I gonna play? I’m getting older and I want a contract next year.’ I’m not going to get one if I’m not playing and we came to the decision that if I’m not playing I’ve got to get out of here. Basically I got a call from Billy (Guerin) and here I am.”

The move has worked out well for the Wild and Reavo, who has picked up four assists in 20 games since registering zero with the Rangers in 12. As for Minnesota, they are 13-6-1 with him in the lineup versus 9-8-2 before the move.

New York was struggling before they dealt Reaves and were lacking even more emotion in the lineup afterwards. It took a helmet toss by Jacob Trouba in an embarrassing loss to the Chicago Blackhawks at home on December 3 to finally wake up the team.

Heading into tomorrow’s contest, both squads are playing with energy and the matchup should be an exciting one. I also wouldn’t expect Reaves to challenge anyone on the Rangers, as he has only one fight since joining the Wild against Red Wings defenseman Ben Chiarot.

There are too many close friendships that have been made despite his short time here. Plus to a man, the Rangers know what his fists are capable of as Igor Shesterkin so eloquently explained after a game last season.

“He’s a good fighter,” Shesterkin said. “I don’t ever want to be in front of those hot hands.”

Reavo did his job here and more. He helped this team grow and gain an identity. They took that all the way to the Eastern Conference Final last year and continue to look like a contender thanks to his contributions on the ice and behind the scenes.

At the end of the day, the Rangers needed to trade Reavo to gain much needed cap space so they can rent a top six forward at the trade deadline. His role was diminishing with the club and Drury did the right thing by moving him quickly. 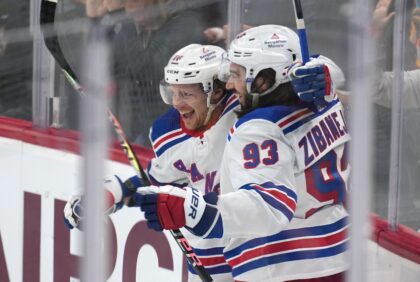