The Seattle Kraken have finally provided hockey trivia fans with the answer to the question: who was the first ever Kraken player?

When the question comes up during Jeopardy or while playing your favorite Sports Trivia game remember the name Luke Henman. On Wednesday, the 21 year-old captain of the Blainville-Boisbriand in the Quebec Major Junior Hockey League was signed to a three-year deal to become the first ever Kraken.

Seattle Kraken GM, Ron Francis is familiar with the kid who was drafted by his last team the Carolina Hurricanes in the fourth round of the 2018 draft. Another former employee of the Canes, Robert Kron is the directory of amateur scouting and worked directly with Francis on the decision to sign Henman.

“So when we made the decision to move forward, you talk to your guys and try to get the name that they feel is the best to be the first person signed for the organization and, when we talked to everybody, Luke was the one we decided to move forward with,” Kraken general manager Ron Francis said. “So we’re excited to have him onboard.” 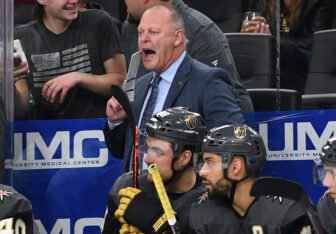 I believe it will come down to Brett Howden and Julien Gauthier. Each suffered an injury to end their seasons, so I don’t think that will factor in the selection. My initial thought was that Howden would be their choice. He’s a young and responsible defensive center, and pivots are always at a premium. Remember, the Golden Knights selected Oscar Lindberg back in 2017.

If the Kraken’s first signing is any indication of how they will approach building their team, then the Rangers are most likely to lose Julien Gauthier over Brett Howden.

Gauthier was picked in the first round, 21st overall in 2016. Ron Francis who was Carolina’s GM at that time said, “He is big enough to have an immediate impact. We’ll see how things play out in development camp and training camp. Physically, he’s big enough, and he skates well enough.”

I still think that Howden will be considered by Seattle, but Gauthier is now emerging as the likely choice.

Get the latest NHL Rumors here!