The New York Rangers likely see the future of NHL goaltenders as being really big. It makes sense, the larger you are, the more net you can cover.

In 2020, the Blueshirts drafted 6’8″ Swedish goalie, Hugo Ollas in the 7th round. This summer, they got another 6’8″ goalie in Talyn Boyko.

I spoke to the 18 year-old Alberta native who plays in Kennewick, WA in the WHL for the Tri-City Americans.

Wanting to be a goalie

Talyn Boyko started playing hockey at age 3 in Drumheller, Alberta. As a kid, he had a clear desire on where he wanted to end up.

“It was always one of my goals to play in the Western Hockey League as I feel it’s the best league in the world for preparing players for the NHL,” Boyko explained.

Some may remember, Tarmo Reunanen started in net as a kid and even Vitaly Kravtsov has played as a goalie in his early years. But unlike those two, Boyko stuck with it and now aims to guard an NHL crease.

“I always wanted to be the kid in net,” he said. “Obviously when your young a lot of it is about the cool gear and stuff but as I got into the position I learned to love the pressure and control you have over games.”

His favorite goalie growing up was Nashville Predators legend Pekka Rinne. As a young goalie, Boyko saw a bit of himself in him. A big goalie making acrobatic saves, as he puts it.

When asked about his strengths, Boyko points to his athleticism and ability to read the play. Both aspects important to have as a goalie and hopefully enough to get him to the next level. Two other goalies Boyko mentions are Carey Price and Jakob Markström.

Joining the Rangers and familiar faces

Boyko, like many others, watched the draft at home surrounded by family due to the pandemic. His parents and sister were with him when he saw his name appear on screen and the young goalie immediately knew what was ahead.

“I can’t explain the feeling of being selected by a franchise like the Rangers. Ive heard nothing but positive things about Mr. Allarie,” he recalls. “It’ll be an honour to meet him and learn from him.”

Boyko has a good feeling about the Rangers, with whom he had several conversations prior to the draft. In the absence of a scouting combine, NHL teams had to rely on Zoom calls to get a feel for the personality of a player.

“I talked to the Rangers before the draft so they were definitely on the back of my mind,” Boyko told me. “Going into the day you don’t really know what to expect so it was still an extremely exciting moment.”

We can safely assume the decision to draft Boyko was initiated by Allaire himself. It’s important for an NHL organization to keep the shelves stocked in every position and that includes goaltending.

Talyn Boyko is the 3rd goalie in the last 2 drafts to be picked by the Rangers and the 2nd from the WHL, joining Kamloops Blazers’ Dylan Garand who is no stranger to Boyko.

“I’ve played against Dylan for the last few years. Don’t know him to personally but he seems like a great guy and i’m excited to get to know him better,” he says. “I’m friends with Matthew Rempe who was drafted last year and also workout with Ryder Korczak.” 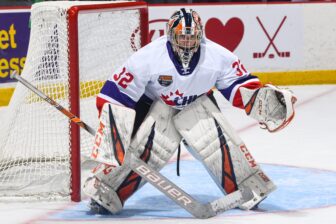 Also Read:
Dylan Garand: The next man in the Rangers crease?

Boyko is starting his 4th year in the WHL in the coming weeks. During his first 3 seasons, he has been able to improve his performance and gradually playing more games.

“Last season definitely had its challenges as everyone dealt with the pandemic,” he revealed. “It would’ve been nice to have a full 68 game season but I am extremely grateful the WHL was able to put together the 24 game season.”

The feeling is shared by many and luckily for Boyko and the other WHL players, they still were able to play competitive games unlike their colleagues in the OHL including Brennan Othmann, Will Cuylle and Evan Vierling.

It’s a big year for hockey in the state of Washington of course with the official inclusion of the Seattle Kraken as the 32nd team in the NHL.

The Tri-City Americans play in Kennewick, 3.5 hours away from Seattle by car, yet the Kraken-hype is noticeable. “Washington state is definitely excited to have a team. I know lots of people from around the Tri-City who are ecstatic about the Kraken,” Boyko notes.

Off-season and life outside the rink

Boyko has a long way to go before he will get a shot in New York. He understands that it will take hard work and dedication to get there. “This off-season I’ve been working on improving my overall strength and my ability to play more neutral in net,” he said about his offseason training. “As well as playing a bit more aggressive.”

He also noted that he spends his off-seasons in Calgary with fellow Rangers prospect Ryder Korczak and some NHLers including Jordan Eberle.

When Boyko isn’t working out he likes to spend his time like on the golf course. It’s a way to wind down and get away from the game.

Finally, I asked him about his unusual first name. Where does it come from, and does it have any special meaning?

“Definitely not a super common name,” he claims. “I don’t think there’s a ton of meaning behind it, my parents just liked it.”

PS: I want to thank Talyn Boyko for sitting down with me and giving me the opportunity to share this story with our fanbase.