The New York Rangers are officially out of the rebuild. That was cemented when they relieved David Quinn of his coaching duties and brought in veteran bench boss, Gerard Gallant.

He was a star player in the NHL with the Detroit Red Wings prior to becoming a head coach. Gallant has been successful in all three of his NHL stops which includes the Columbus Blue Jackets, Florida Panthers, and Vegas Golden Knights. The 58 year-old coach has a lifetime NHL record of 270-216-4-51, including a trip to the Stanley Cup Final in 2018.

That’s all well and good from a resume standpoint, but he does face some early challenges coming out of the gate.

Changing the way the Rangers play

When it comes to the style of play Rangers fans should expect, Gallant pointed to his last stop in Vegas. He emphasized playing a “200 foot game” and for players to have specific roles on the team.

“We need to take a deep look at what everyone’s roles are,” GM Chris Drury said at the end of the season. “We’ve got to get to a place where when you jump over the boards you know what your role is.”

Then he went out and traded for the rights to Barclay Goodrow and signed him to a long-term deal. Drury also added muscle in Ryan Reaves and Jarred Tinordi. The Rangers added some more physicality in Sammy Blais and Patrik Nemeth.

Now it’s up to Gallant to form the right lines and make clear what each player’s role is. It shouldn’t be hard to tell Artemi Panarin that he’s the offensive catalyst for his line, or Mika Zibanejad is the sniper on his.

There does need to be some blending of talents which will be epitomized by whatever third line he conjures up.

Drury has already stated he sees Filip Chytil as a center. Let’s face it, he doesn’t play like either of Goodrow’s old linemates in Blake Coleman or Yanni Gourde. Can Gallant get Chytil to be more physical and use his size? That’s an example of one of the challenges in changing the way the Rangers play.

Each line needs to have its own identity. The top two lines are normally your offensive bread and butter. Your 4th line needs to grind it out and wear down the opposition. However, the third line needs to be the best of both worlds.

“It’s not going to take 15 guys to win, it’s going to take all 23 guys on the roster,” Gallant said after being hired. The onus is going to be on him to find the right 23 players that fit the roles best.

How to handle the overload at left wing

The next challenge Gallant will face is what do with left wings Chris Kreider and Alexis Lafrenière. There’s no need to discuss Panarin because he will be on one of the top two lines.

Some are speculating that one of those two will move to play right wing in the top six. If that is the case, Vitali Kravtsov will be dropped down to the third line. I’m not so sure that two skilled guys and one grinder is a good mix.

Instead, can Gallant keep Kravtsov as a second line right wing behind Kaapo Kakko, and use Kreider with Chytil and Goodrow? Lafrenière could also work there, but the organization seems to be hinting at a commitment to keep the #1 overall pick of 2020 in the top six.

Lafrenière finished last year with 21 points in 56 games but managed 13 of those points in the final 25 games of the season. Lafrenière also scored 8 of his 12 goals in the team’s final 23 games.

Gallant will also need to live up to his own words at his intro presser. “You give [the kids] the opportunity and hope that they take advantage of the opportunity they get,” he stated. “We know we’ve got some very young, talented hockey players on our team. They’re going to get every opportunity.” 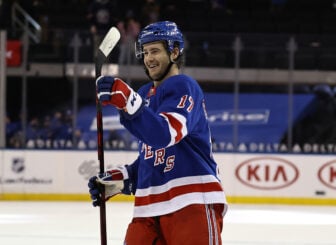 The Blueshirts have been without a captain since Ryan McDonagh was traded in 2018. Early this summer, Drury made it point to wanting to give the “right” person the C this season.

“We can keep moving this thing forward, a big piece of that for me would be getting a captain,” he said. “For me it’s a priority. At the end of the day, it has to be the right person. I’m not interested in giving it to someone to just say we have a captain.”

Those sentiments were echoed again before the start of Development camp. Currently, Drury would like to allow Gallant more time to get to know his players before a final decision is made.

The Rangers are believed to have narrowed down their choices to Chris Kreider, Jacob Trouba, and Mika Zibanejad. Of the three, Kreider appears to be the favorite. Zibanejad’s looming UFA status will likely play into the decision.

Why is this so important? After three years without a captain, whomever gets selected will be scrutinized. Should the Rangers get off to a slow start, that pick will be questioned.

While it may be a small thing in the grand scheme, it is just one more early challenge for Gallant.

Who are the top players in the Metro and Atlantic Division

Is Artemi Panarin the best winger in the Metro? Who is the top center in the Atlantic? Is it Auston Matthews or Aleksander Barkov? Find out here.