The New York Rangers were back to work today after imploding against the Oilers on Saturday with Vitali Kravtsov skating as an extra.

Despite two consecutive losses, head coach Gerard Gallant isn’t likely to have Kravtsov play. If he’s indeed scratched again, this will be his eight straight game since coming out of the lineup with a tooth infection after an 8-2 romp over the Detroit Red Wings on November 10.

“I like the kid, (but) right now, he’s our extra forward,” Gallant said as relayed by Vince Mercogliano. “I’m happy with the lineup. The fourth line has been playing really well for us. So, who am I going to take out to put him in when he’s played 6 games this year and he’s been hurt and he’s had surgery? “It’s not that I don’t like kid and I’m sitting him out because of that. I like other players.”

The current situation for Kravtsov and his agent isn’t ideal after the former first-round pick (9th overall, 2018) signed a one-year show me deal this past summer.

Remember, Kravtsov requested a trade before the start of last season and went to go play in the KHL instead of reporting to the Hartford Wolf Pack.

By all accounts, Kravtsov’s done everything the Rangers have asked of him beginning with arriving in August to prepare for camp. Some bad luck injuries have impeded his progress, but there’s nothing I’ve seen from players like Sammy Blais and Ryan Carpenter that would warrant scratching Kravtsov for eight straight games.

Which leads me to believe that the Rangers could be working on a trade of the 22 year-old forward with just one assist in 6 contests.

There’s a possibility the Rangers are trying to add a veteran left defenseman but his value is lower than it’s ever been. Earlier today, one source estimated Kravtsov’s trade value to be around a third round pick.

I’ve reached out to Kravtsov’s agent Dan Milstein on Saturday but have not heard back.

For Kravtsov young career, he’s played in 26 NHL games registering two goals and three assists. He currently makes $875,000 and no longer waivers exempt. The skilled winger will be an RFA in July.

While Gerard Gallant didn’t rule out playing Kravtsov today, it’s unlikely he’s going to change the forwards. However, we may see some new lines come Monday versus the New Jersey Devils.

Per multiple reports from practice this is how things lined up:

It should be noted that Ryan Lindgren was injured late yesterday and labeled day-to-day and didn’t practice. Joining him were Adam Fox and Vincent Trocheck as both were given maintenance days.

So it’s possible that Trocheck could move into the third line center spot and have Goodrow shift to the right.

“I’m not sure yet,” Gallant said about Chytil on the second line. “Trocheck is on a maintenance day but it’s a good possibility.” 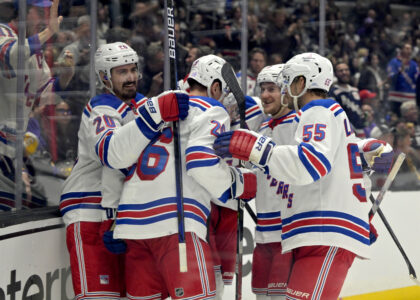