Jun 22, 2018; Dallas, TX, USA; New York Rangers right wing Vitali Kravtsov (74) poses for a photo with team representatives after being selected as the number nine overall pick to the New York Rangers in the first round of the 2018 NHL Draft at American Airlines Center. Mandatory Credit: Jerome Miron-USA TODAY Sports

In addition, the team also announced they’ve signed forward Gustav Rydahl to a 1-year deal. The 27 year-old was an undrafted free agent playing in the SHL. Terms of the deal per CapFriendly is a one-way contract for $750,000. He is waivers exempt.

The New York Rangers and restricted free agent forward Vitali Kravtsov officially agreed to a 1-year extension. The terms of the deal are for $875,000 on a one-way contract.

Kravtsov, 22, skated in 19 games with Traktor Chelyabinsk of the Kontinental Hockey League (KHL) in 2021-22, recording six goals and seven assists for 13 points. In the playoffs, Kravtsov notched seven goals and three assists for 10 points in 15 games. He ranked tied for seventh among KHL skaters in playoff goals.

The former first round pick, 9th overall in the 2017 Draft left the Rangers for the KHL after failing to make the roster out of training camp and refusing assignment to the AHL.

This deal works for both sides as Kravtsov can’t be sent to the Hartford Wolf Pack without clearing waivers which increases his chances of playing in the NHL next season. In addition, by having him under contract it raises his value versus trying to trade his rights.

Rydahl is a big forward at 6-3, 201 lbs that can also play center. He will likely start the season with the Hartford Wolf Pack.

New York Rangers President and General Manager Chris Drury announced today that the team has agreed to terms with forward Gustav Rydahl on a one-year contract.

Rydahl, 27, skated in 44 regular season games with Färjestad BK of the Swedish Hockey League (SHL) in 2021-22, registering 15 goals and 15 assists for 30 points and a plus-6 rating. On Färjestad BK, Rydahl ranked third in goals, fifth in points, and seventh in assists. His plus-6 rating was tied for the fourth highest on the club. On his way to winning the 2022 SHL championship, Rydahl posted six goals and six assists for 12 points and a plus-9 rating in 19 playoff games. 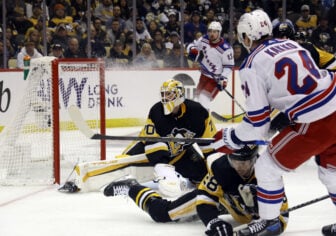