Adam Fox and his agent Matt Keator have to be smiling from ear-to-ear after the deal Cale Makar just signed. There’s no doubt that Makar’s camp used the deal 21 year-old defenseman Miro Heiskanen inked a week ago.

The Stars awarded Heiskanen an 8 year deal worth $8.45 million per season. That gave the Colorado Avalanche a great contract comparable for Makar.

Makar, 22, was a Norris Trophy finalist this season after finishing with eight goals and 36 assists in 44 games. The Norris Trophy is awarded to the league’s top defenseman, which Adam Fox secured with an amazing season of his own.

“In just over two seasons, Cale has already established himself as one of the premier defensemen in the National Hockey League,” Sakic continued in a team statement. “His ability to play in all situations and at both ends of the ice makes him truly unique and we are excited to have him anchor our blueline for years to come.”

How much will Adam Fox get?

Fox finished second overall in scoring for blue-liners with 47 points this past season. His 42 assists were the most by an NHL defenseman and he was seventh for total ice time. Only Edmonton’s Tyson Barrie had more points. Heiskanen in contrast had just 27 points in 55 games, but is should be noted he just completed his third season at 21 and his ceiling is high.

Seth Jones just signed an 8 year deal with an AAV of $9.5 million, but at 26 years-old and one year away from unrestricted free agency, he isn’t an exact comparable. Makar on the other hand is perfect as he completed his ELC and can score.

Fox just wrapped up the second year of his three-year entry-level deal. The Blueshirts have an entire season to try and decide what to do for his next contract when he becomes an RFA without arbitration rights. Friedman on recent podcast said he believes the Rangers will talk to him about an extension as soon as the window opens this summer.

It’s a wise play, especially with a Norris win under his belt. The Rangers should choose to lock him up for 8 years if they can. That will help drive down his AAV, but if were similar to Makar’s 6 year deal, it would certainly come in higher, maybe $9.5 to $10 million per season.

Can Chris Drury get Fox to go the full 8 years? If he does that AAV could come in at Makar’s $9 million. Any extension signed this summer would not kick in until after his ELC expires in the summer of 2022. 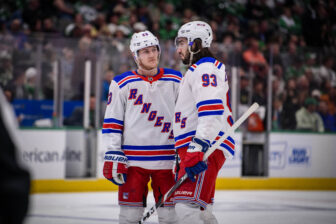 Day One of the NHL Draft was a doozy! Teams began their maneuvering to shed salary and acquire additional first round picks in a flurry of activity. Before a single selection was made there were four big trades, the buyout of Tony DeAngelo, and the signing of Taylor Hall. Read more here.