New York Rangers contracts: Mika Zibanejad’s next deal, and Adam Fox in no rush to extend

The moment Ryan Nugent-Hopkins signed his new deal with the Edmonton Oilers, it sent eyebrows raising around the hockey world. Why would a 28 year-old player in his prime sign for less money per season than his last contract? When RNH inked the deal his AAV went from $6 million to $5.125 million, many thought it could have some serious impact on new deals going forward.

Will Ryan Nugent-Hopkins deal have any impact on UFA deals?

I reached out to several agents to ask them their thoughts regarding RNH’s deep hometown discount. In particular, if they felt it would have any bearing on the market going forward. Almost unanimously they all pointed to the Oilers ability to offer that 8th year as reason for the lower AAV.

Many free agents that hit the market can’t get more than 7 years on a new deal. That’s only available to the team that holds that player’s rights so long as they were on the roster at the previous deadline.

So trying to use RNH’s contract as a comparable will not work in many cases. Bottom line, RNH’s deep discount is going to be disregarded in the UFA market per one prominent agent.

The Rangers top center Mika Zibanejad has only next year left on his contract. He currently earns $5.35 million and I doubt we are going to see what RNH just did here. While there’s a chance for a discount if the Rangers are willing to offer him eight years, it seems unlikely they will go that far. Mika is currently 28 years old, and a deal with that term takes him to the age of 36.

Now, I’m not ruling out Chris Drury offering an 8th year, but Mika’s next deal is projected to be in the $9 to $10 million range. Would he take $8 million or less for that extra year on a deal? It is certainly possible since both sides are very interested in continuing the relationship. It is believed that they will talk new contract terms when the window opens later in July.

I wouldn’t expect a contract extension hammered out quickly either. I also would caution anyone from getting worried about it. There’s no urgency to do it before the season starts, and the Rangers did hammer out a new deal with Chris Kreider who was in a similar situation. That was an 11th hour deal inked at his last trade deadline before heading to UFA status.

Adam Fox in no rush to extend

Elliotte Friedman recently reported on his 31 Thoughts podcast that the Rangers were going to look to extend Adam Fox when the window to negotiate opens this summer.

The freshly minted Norris Trophy winner still has one year remaining on his ELC. According to a source with knowledge, Forever Blueshirts learned there’s “no rush” to do so.

With that said, I am not ruling a new deal out. However, before Fox commits to negotiations another comparable player needs to sign his next deal first,.

Cale Makar is a 22 year-old RFA without arbitration rights, which means the Avs are in full control. Bridge deals are usually what happens with most RFAs, but Makar is not your average RFA as he was a Norris Finalist. If Joe Sakic wants to conserve cap space to retain key UFA’s, bridging Makar at around $4 to $5 million is one way to go. However, according to Elliotte Friedman, it sounds like Sakic is thinking long term on Makar’s next deal.

There’s some chatter that Makar could get 8 years at around $8 to $8.5 million. Should Makar sign that deal, it would be a great basis for Fox and his camp to hammer out something to stay on Broadway. If the Avs can only do a bridge deal then I don’t see Fox extending this offseason.

No matter what, I want to stress that Fox is almost assuredly getting an 8 year max deal. 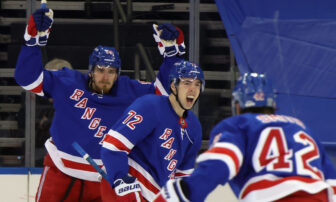 Chicago Blackhawks captain, Jonathan Toews broke his silence over his health issues today. In a two minute long video, he revealed he has been battling with Chronic Immune Response Syndrome. Read more.