Where should the New York Rangers play Vitali Kravtsov?

New York Rangers forward Vitali Kravtsov has come into training camp doing and saying all the right things. It’s a breath of fresh air for the 9th overall pick in the 2018 NHL Draft after he left twice for the KHL instead of staying with the Hartford Wolf Pack.

“I’ve definitely made a lot of noise previously, so there’s this necessity to redeem myself a little bit,” he said via a translator. “I just want to do what everyone else is doing. Put in the work, get on the team, and do my part.”

This summer, he signed a one-year, one-way extension despite requesting a trade at the beginning of last season. The 22 year-old reported to New York early to begin preparations for the upcoming campaign and has received praise from management.

There’s no denying Kravtsov is putting in the effort, it’s just that the results in preseason do not warrant a top 9 role, let alone a spot in the top 6 with Vincent Trocheck and Artemi Panarin.

Kravtsov is a big kid at 6-3, 189 pounds with raw talent. Unfortunately, his decision to not play pro last season with the Wolf Pack cost him valuable development and adjustment time in North America.

It’s showing now as the smaller ice surface and game speed appears too fast for him. He’s often stuck on the outside and looping along one side of the ice to be effective. In four exhibition games, Kravtsov has one assist and is -3.

On Wednesday night’s 5-4 loss to the Bruins, the second line with Trocheck, Panarin, and Kravtsov were horrendous ending up with a -2 rating as a unit.

“I didn’t like our game tonight, not just [Kravtsov],” he stated. “A lot of them didn’t do themselves favors with tonight’s game. Hopefully they’ll get back and play better than they did tonight. A lot of guys are battling for jobs but it wasn’t a good game for a lot of those guys tonight.”

Of the three, Kravtsov is most likely on the bubble regarding which line he will play on. That became a burning question today when he didn’t even practice with the regulars. In his place on the second line was Jimmy Vesey, who is on a PTO and fighting for his hockey life.

“We just tweaked it a little bit today,” Gallant explained. “Management wants to see some different people in different spots. It doesn’t mean a whole lot. We’ll make a decision on our final lineup tomorrow for the last game, but we just threw somethings out there for today.”

Where to slot Vitali Kravtsov?

Whatever lines are put forth to practice on Friday, the question still remains where to slot Vitali Kravtsov?

Here’s one key piece of information that needs to be understood: Kravtsov must pass waivers in order to be sent down to the Wolf Pack.

With that in mind, there’s no way the Rangers are going to risk losing a recent first-round draft pick to a waiver claim. And I assure you, he will be claimed. Whether other guys deserve to beat him out doesn’t matter, he’s starting the season in New York.

So where do you play him? Do you keep him on the second line with fellow Russian winger Artemi Panarin? The Rangers leading scorer for the last three seasons has taken a liking to Kravtsov and become a mentor to him.

“Honestly, it’s more for selfish reasons,” Panarin said jokingly. “I’m just trying to get him to hold the puck more, and to be a better linemate. He’s getting better every day.”

That’s one option, but the better one would be playing on the third line with Alexis Lafreniere and Filip Chytil. Although, Jimmy Vesey as a second line right wing doesn’t seem appealing to me at all.

Which leads me back to what I’ve called for before camp even opened, a third line with defensively responsible Barclay Goodrow on the left wing, with Chytil and Kravtsov. You could even try Sammy Blais there as well.

Come opening night, there’s no way Kravtsov should be getting top 6 minutes. Especially when Lafreniere is ready to switch to right wing in order to do so. In the same breath, Kravtsov isn’t a checker so a fourth line role makes no sense.

His place is on the third line and Gerard Gallant has to figure that out before the season starts next week. 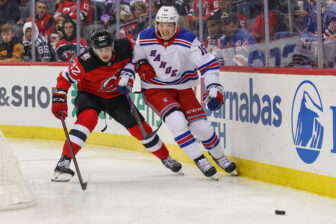