The Wolf Pack completed last week’s four game schedule and their woes continued. The club dropped each contest in regulation before secured a point on Monday against the Providence Bruins (4-3 overtime loss) to start a new week.

The gradual decline is cause for concern as they approach the 2022 Calder Cup Playoffs.

For the majority of the season, the team was a shoe-in for the playoffs with one of the top records in the AHL. Today, the club is in the middle tier and fighting to secure a playoff spot, even after the playoffs were expanded (to six teams in the Atlantic Division).

As of Tuesday night, Hartford is ranked fifth in the division with a record of 29-26-6-2 for 66 points (.524). The standings are tight as the Wilkes-Barre/Scranton Penguins are in the final spot with 68 points (.523) and behind the Wolf Pack by .1 as standings are based on point percentage.

Scoreboard watching is a must as Hershey is ahead of Hartford, but aren’t out of reach (.538). The Bears helped the Pack by defeating Bridgeport (in seventh), while the Penguins play on Wednesday against Lehigh Valley. The Penguins could potentially move into fifth if they win or secure a point.

Hartford is looking to make the Calder Cup Playoffs for the first time since the 2014-15 season. That is in jeopardy if the club continues their losing ways.

To complete this week, Hartford will face Charlotte for three in a row.

The 23 year old prospect played his first two professional games last Saturday and Monday. Trivigno is another good addition to Hartford’s roster as the club is struggling for consistency. In his debut, the forward had an impressive outing, showcasing his speed and ability to make stellar passes. Despite Hartford dropping the game by a score of 8-5, Trivigno was impactful in attempt to give Hartford a fighting chance in the contest. The forward recorded two primary assists which helped set up beautiful goals.

The second point of the night was impressive as Trivigno helped the offense with pressure and found Nick Merkley at the right spot.

For his first professional outing with Hartford, the Rangers prospect has looked stellar. In his second game against Providence, Trivigno was held off the scoresheet. Trivigno needs time to adjust but will be key to securing a playoff spot.

After being acquired on the American Hockey League Trade Deadline Day on March 28th, the 26 year-old forward has brought size and versatility to Hartford’s roster. Through four games, Letunov notched two points (one goal, one assist) in a Wolf Pack uniform. Previously this season with the Chicago Wolves, Letunov secured 13 goals and 10 assists for 23 points.

Hartford’s coaching staff has liked Letunov’s play since joining the organization, giving the forward solid minutes. Letunov in the last two games played with Nick Merkley and Bobby Trivigno and the forward line had good looks offensively, along with solid chances against opponents.

After a strong start to the first half of the season, the veteran netminder has struggled in recent weeks. The 32 year-old’s decline began in February and he’s unable to make saves consistently.

In fairness to Kinkaid, the defense has as well. For instance, Kinkaid and Adam Huska received less support from the blue line as both goalies faced continual high quality chances (breakaways, two on ones, etc.) in games. The veteran must bounce back before its too late as the playoffs are coming. Earlier in the season, Kinkaid was able to keep Hartford afloat in games and helped them securing points.

Check out the latest on playoff positioning here in addition to Hartford’s magic number to clinch a playoff birth.

AHL on the Beat: Ronning thriving as intensity grows for Wolf Pack

Check out the latest article by Patrick Williams on Ty Ronning’s performance. 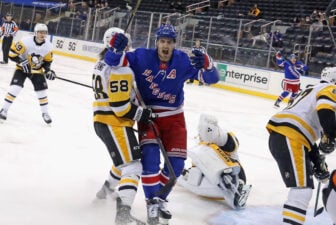