The New York Rangers are reportedly close to signing UMASS captain Bobby Trivigno according to Corey Pronman of The Athletic.

Mollie Walker of the NY Post previously noted that the Rangers were among four teams on Trivigno’s list that included the Islanders, Panthers, and Predators.

According to multiple reports, the 2-year ELC begins next season. The team also signed him to an Amateur Try Out to play with the Hartford Wolf Pack in the AHL.

Trivigno, 23, recently completed his senior season at the University of Massachusetts-Amherst (Hockey East), where he served as captain for the Minutemen. In 2021-22, Trivigno tallied a career-high 20 goals and 29 assists for 49 points and a plus-22 rating in 37 games. Among NCAA skaters, he ranked tied for third in points, tied for eighth in assists and tied for ninth in goals. Trivigno was named the 2021-22 Hockey East Player of the Year, the College Hockey News Player of the Year, and a Hobey Baker Award Top 10 finalist, the award for the top collegiate hockey player. He also became the fourth player to win the Walter Brown Award in back-to-back seasons, presented annually to the best American-Born Division I college hockey player in New England.

The Setauket, New York native finished his collegiate career with 53 goals and 78 assists for 131 points and a plus-73 rating in 139 games. In 2020-21, he helped guide the Minutemen to a national championship, where he was named the Most Outstanding Player of the Frozen Four and to the All-Tournament Team. That season, he led UMass in scoring with 11 goals and 23 assists for 34 points in 29 games. In 2020-21, he earned CCM/AHCA Hockey First Team All-America honors and was also selected to the All-USCHO and to the Hockey East All-Star First Team. As a freshman in 2018-19, he played in a career-high 39 games, finishing 16th in the nation in freshman scoring (13G-15A) and tied for fourth in the Hockey East.

A 5-8, 161 pounder, Trivigno played one season for the Waterloo Black Hawks of the United States Hockey League (USHL), notching 16 goals and 27 assists for 43 points in 58 games and a plus-11 rating. Trivigno attended Shattuck St. Mary’s, where he won a national title in 2016 with the U-16 team.

Trivigno, 23, is a New York native that was supposed to take part in the Rangers development camp before the season started. Unfortunately, NCAA rules would not allow him to partake in the camp.

The Blueshirts have had their eye on an undrafted college star from UMASS dating back to September. This year, he collected 48 points in 36 games which includes 20 goals. He was recently named College Hockey News’ player of the year.

The senior is an NHL free agent, and is expected to sign shortly with a team. He finished his final season with the Minutemen scoring 20 goals and 49 points, with 126 shots and a team-best plus-22. For his college career, Trivigno finishes with 53-78—131. As a freshman in 2019, he was infamously suspended for the national championship game after a penalty he took in the semifinal that was reviewed after the game. He then avenged that year by leading UMass to a national championship in 2021, when he was named the tournament’s Most Outstanding Player.

Trivigno is a gritty, heart and soul type player. The forward has been playing left wing but could probably switch sides with little difficulty. 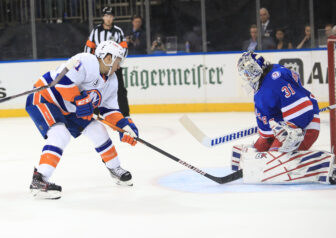