The New York Rangers will embark on their 96th regular season in club history with the sole mission of winning the Stanley Cup.

Along the way, they’ll have to compete against some of the league’s best and it starts tonight against the Tampa Bay Lightning.

Here’s at least one bold prediction for every player listed on the 23 man roster on opening night.

#6 Zac Jones: The young defenseman will stick with the team all year proving to be an excellent partner for Braden Schneider and earning an extension.

#8 Jacob Trouba: With Ryan Reaves expected to play less this season, Trouba will be the team leader in hits. That being said, Trouba has shown he can provide offense and this year should be one of his career-best. Look for 40 points with 15 goals from the Rangers new captain.

#10 Artemi Panarin: After flirting with the century mark several times, including 96 points last season, Panarin will finally score over 100 points for the first time in his career.

#13: Alexis Lafreniere: 20 goals won’t be a problem this year for Laffy, but now that he’s going to get some power play time a 50 point season is in the cards.

#16: Vincent Trocheck: I’m expecting him to struggle a little out of the gate but playing with Panarin is going to be a boon for Trocheck this year. Chalk up 35 goals for the Blueshirts new center.

#20 Chris Kreider: I don’t expect Kreider to match his 52 goal campaign from last year but 40 goals is doable. My prediction is that he will win the Conn Smythe Trophy in the playoffs.

#21 Barclay Goodrow: I think Goodrow is going to be one of the most important players for the Rangers on the PK. I predict he will lead the team in shorthanded goals with 4.

#22 Ryan Carpenter: He was brought in to fill the role Kevin Rooney left behind. He has a little more offense to his game and a 20 point season is within reach.

#23 Adam Fox: The Rangers offensive leader from the blue-line will flirt with 90 points this year. I’m banking on at least 85.

#24 Kaapo Kakko: This is the year Kakko finally breaks out. He looks more confident than I’ve ever seen him. I’m think he has a massive potential for goals on the first line, so my prediction is for him to score at least 30.

#25 Libor Hajek: He’s solid and will play a role on this team if any Rangers’ defenseman gets injured. However, I predict he will be an everyday starter by the trade deadline. It will just be on another team.

#26 Jimmy Vesey: The 29 year-old forward turned a PTO into a standard contract due to his hard work. My prediction is that Vesey’s work ethic will make him a fan favorite this season on Broadway.

#29 Dryden Hunt: More likely than not, Hunt will wind up with the Wolf Pack. If he does, I expect him to be one of their top scorers.

#31 Igor Shesterkin: Back to back Vezina trophies. He will also lead the NHL in SV%.

#41 Jaroslav Halak: The veteran backup along with Shesterkin will help the Rangers claim the William H. Jennings Trophy as the combined leaders in GAA.

#45 Braden Schneider: He only played 43 games last season and scored 11 points. This will be his first full season on the Rangers to show what he can do. I can see a 25 point season with 7 goals in his future.

#55 Ryan Lindgren: Aside from leading the team in most pucks and sticks to the face, Lindgren will lead the team in plus/minus category with at least a +32.

#72 Filip Chytil: If preseason was any indication, Chytil is going to shoot the puck like crazy and record his first ever 20 goal season.

#74 Vitali Kravtsov: The former first-round pick will struggle early but find his way over the next few weeks. If he stays on either the second or third line, he should pot at least 10 goals come the NHL Trade Deadline. That’s when he will be packaged for a key rental, most likely Patrick Kane.

#75 Ryan Reaves: One of the league’s true heavyweights, Reaves may actually fight more than the handful of times he did last year. Bold prediction, Reaves gets at least 7 fighting majors this season (and wins them all).

#79 K’Andre Miller: An up and coming star among defenseman. K’Andre’s development has been a steady climb and he should score at least 10 goals and 30 points this season. The prediction however is he’ll finish in the 10 in Norris Trophy voting.

#91 Sammy Blais: Blais just needs to stay healthy. If he can, leading the team in hits among forwards is an easy prediction.

#93 Mika Zibanejad: One of the best defensive forwards in the game is finally recognized and wins the Frank J. Selke Award. 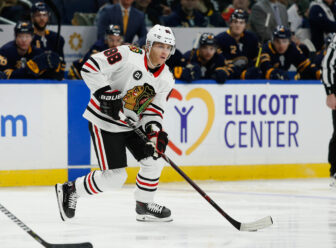