When drafting prospects, sometimes teams scout players and select those who may be able to make an impact on their team down the line. Sometimes, they scout and analyze but throw a pick at a wall and see if it sticks. The Rangers have a plethora of prospects that are brewing in the system, thrown at the wall attempting to stick somewhere. Here are the three stars from the past week in the Rangers North American prospect pool! 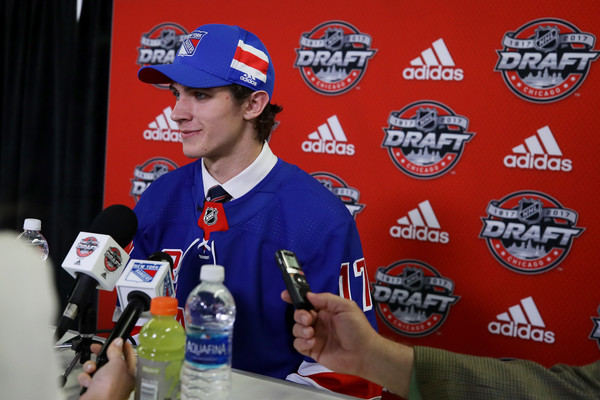 Drafted by the Rangers 174th overall in the 18th round, Morgan Barron posted 50 points (28 goals, 22 assists) in 46 games for St Andrew’s College along with a brief stint in the USHL for the Sioux City Musketeers.

Barron collected two assists and a plus/minus of +2 in his first exhibition game with Cornell against the University of Guelph. Barron will begin his Freshman season on Oct. 27th.

This past week, Day recorded two assists, had a plus minus rating of +3 and recorded 10 shots on goal in three contests. The 81st overall pick of the 2016 NHL Entry Draft is tied for second in Windsor on plus/minus and first among team defenseman overall with a plus/minus rating of + 2 this season. Coming in at 6’3′ and 231 pounds, Day is considered to be a mobile, two day defenseman with lots of skill and strong skating ability.

“A mobile two-way defenceman who boasts an elite level skill package. Strong on the forecheck and delivers hard shots and crisp passes. His consistency and enthusiasm exhibited at the game’s defining moments does seem to wane, and the pressure felt seems to impact his decision-making slightly. When focusing on simplifying his game and getting all the little things right, he becomes a forceful impact that is hungry to be a difference maker. All-in-all, a talented two-way defenceman who has all of the raw abilities in place to become an elite defenceman, but has yet to put it all together and prove that he can thrive in the driver’s seat.” (Curtis Joe, EP 2015) Elite Prospects

Signed as a free agent on April 1st, 2016, Chapie played his last three seasons at UMass-Lowell. Chapie registered 35 points in his last season with the Riverhawks. In a brief stint with the Swamp Rabbits during their recent playoff run, Chapie posted 12 points in 24 regular season games (4 goals, 8 assists) and notched two assists in the postseason for Greenville.

This season, Chapie posted two multi-point games during the past week, posting a goal and four assists in the two games. Chapie also tallied three assists on Oct. 14 vs. Wheeling, and is tied for third in the ECHL assists, and is tied for fourth in the league in points.