Adam Edström is a formidable individual thanks to his 6-8′ frame and tipping the scales at 225 pounds. At New York Rangers Development Camp this summer, only Matthew Rempe came in bigger at 6-9′ and with a weight of 240.

The Blueshirts selected the native of Karlstad, Sweden in the 6th round of the 2019 NHL Draft. He plays for Rögle BK in the SHL where last season he registered 7 goals and 9 points in 43 games.

According to Hockey News Sweden, he will be making his way to the United States for Rangers training camp to earn a spot. If he can’t make the roster, Adam will return to Rögle BK on loan per the MOA.

“He will go to Rangers’ main camp and probably also the rookie camp in the middle of September,” GM Chris Abbott said. “If he doesn’t make the New York Rangers, he’ll come back to us. This is what the plan looks like.”

Edström, 21, can play any forward position. In an interview with Steven Vogel posted on Forever Blueshirts in October, 2021 he provided some insight.

“I feel comfortable playing both wing and center, all I can see is a upside to my game,” Edström said. “I learned how to play both positions and feel like I can use that to my advantage in different situations on the ice”.

However, when he’s on the ice, Adam’s not really looking for points. Sure, he loves to score like any hockey player but he also loves to hit letting his opponents know they are in for a tough time.

The expectation this month is for Edström to compete for a bottom six role. He will battle freshly signed Ryan Carpenter for the fourth-line center spot, but could still make the team on one of its wings.

Should he not make it out of camp, the Rangers must loan him back to his SHL team due to Article 4.2 in the MOA:

It should be noted that these rules apply to Adam Sykora, who was selected in the second round of the 2022 Draft and is 17 years old. 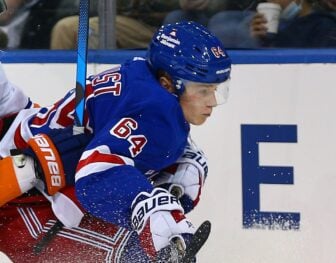