The New York Rangers will have at least two All-Stars heading to Las Vegas in defenseman Adam Fox and forward Chris Kreider.

The All-Star rosters, as voted on by the fans, were revealed Thursday on ESPN’s “SportsCenter” and Sportsnet’s “Hockey Central.”

The All-Star skills competition will take place on Feb. 4, followed by the All-Star Game the following day. Fans can now vote on the 2022 NHL All-Star Last Men In to select the final player for each All-Star roster.

Fox, 23, has recorded 125 points in 162 NHL games to go along with a +50 rating and only 60 penalty minutes. The native of Jericho, LI shocked the hockey world by winning the Norris Trophy for best defenseman in his sophomore season. A feat only accomplished by one other rearguard, Hall of Famer Bobby Orr.

The accolades for Fox didn’t stop there as he was also recognized as the winner of the Steven McDonald Extra Effort Award and was named the team’s MVP last season. He is currently vying for his second Norris Trophy.

Fox’s 36 points are tied for the team lead in scoring with Artemi Panarin and good for third-most among NHL defensemen behind Victor Hedman (38) and Roman Josi (37).

Fox has 10 multi-point games this season, which is tied for the most among NHL defensemen.

Kreider, 30, is the longest tenured member of the team in his 10 season with the Rangers. The veteran leader made his NHL debut with the Blueshirts back in 2012-13.

He is also just two goals away from 200 in his career and becoming the 12th player in franchise history to hit that milestone. When Kreider does, he will be one of only three active players to record 200+ goals and 1,200+ hits joining Alex Ovechkin and Evander Kane.

Kreider’s 21 goals ranks fifth in the NHL and his 12 power play goals still holds at number two. His 17 points on the man advantage ranks fourth in the league.

Good Luck to both Adam and Chris. 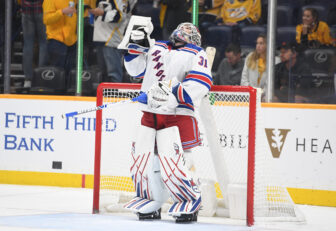