Ailing New York Rangers take on Canadiens at the Garden

The New York Rangers will be limping their way into a winnable matchup against the Montreal Canadiens, who sit last in the Atlantic Division.

Forward Julien Gauthier has already been ruled out and Chris Kreider is doubtful. That means Alexis Lafreniere should remain on the first line and newcomer Jake Leschyshyn will make his Broadway debut.

“A huge opportunity to prove myself again,” Leschyshyn said on Saturday. “I’m just trying to bring some energy to this team. Be a good two-way center or winger, wherever they throw me and bring good compete to this team.”

Leschyshyn, 23, was claimed off waivers from the Vegas Golden Knights on Wednesday. He has no points in 22 games this season.

Gerard Gallant confirmed that he will play fourth line center shifting Jonny Brodzinski to the wing.

Aside from the injuries, a stomach bug has been making its way through the team causing Artemi Panarin, Vitali Kravtsov, and Ryan Lindgren to miss practice.

“They’ll be (in),” Gallant said. “They’ve all been playing though it for the last week and half. Hopefully it doesn’t get to the point where they can’t.”

New York is coming off a huge dramatic and emotional comeback win over the Dallas Stars on Thursday. K’Andre Miller scored a buzzer-beater to get the game to overtime for Adam Fox to win it.

The latest victory improved the Blueshirts January record to 5-0-1. They’re also 13-2-2 in their last 17 games allowing them to move up to third place in the Metro Division, six point behind the Carolina Hurricanes for first.

Defense has been crucial to the Rangers turnaround, specifically scoring from the blue-line. Fox, who leads the team’s defensemen in scoring with 44 points in 43 games has 9 January points to date. Miller is riding a 6 game points streak with 3 goals and 4 assists.

“We’re the type of team that it doesn’t matter the time or the score, we’re still going to come pushing,” Miller explained. “We’re going to fight until that last buzzer.”

Igor Shesterkin is the likely starter with the Rangers playing their first of a back to back set. They will be on the road to face the Columbus Blue Jackets on Monday.

Don’t get raked over the Coles

The Habs are coming off a 2-1 loss to the New York Islanders on Saturday, where they played a decent game. Unfortunately for them, they are now 0-6-1 in their last 7 road games and 2-8-0 in their last 19 games overall.

One player for the Rangers to keep an eye on is youngster Cole Caufield. Fans in Montreal are making a huge push to get him to the All Star game with online voting, and they have a solid case for sending the 22 year-old to Florida. 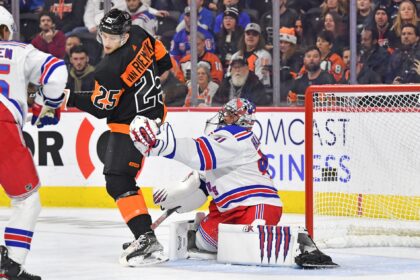