What if everyone left Alexis Lafreniere alone and let him develop?

Alexis Lafreniere much like the New York Rangers was actually having a decent start to this season. The team opened with a 3-1-0 record and he registered 3 points in that span.

As the Blueshirts started to struggle around him going 0-2-2 in the next four games, he failed to register a point. The team worked themselves out of that funk with three straight wins where Lafreniere picked up two points to close out October.

When the Rangers meandered through November with a record of 6-6-2, the third year winger only garnered 5 points and those were recorded in just three games.

Lafreniere’s best stretch of hockey came, you guessed it, during the team’s seven-game winning streak. He notched 6 points (2G – 4A) to help the Rangers turn their season around. New York played two more after that, losing to the Penguins and beating the Islanders, where Lafreniere had an assist before the holiday break.

Then the wheels fell of the bus with just two assists in the next 10 games and a healthy scratch sprinkled in to start an explosion of trade rumors.

When the Rangers made an organizational decision to scratch the first overall pick in the 2020 NHL Draft against the Tampa Bay Lightning on December 29, it was done to allow him to reset.

“I keep saying he’s 21 years old,” Gerard Gallant said. “He scored 19 goals last year. I was expecting similar numbers this year and it hasn’t quite been there. I’m not concerned about the kid. A lot of people are but I think he’s going to be a good player. He’s got the tools, and the talent. I don’t know how many times I’ve said that he doesn’t get the same opportunities as other kids get as a first overall pick. You can blame that on me or [David Quinn] but we’ve got star players ahead of him. We’re trying to win. That’s my goal.”

Despite the honest explanation, rumors continued to swirl with criticism that he was a bust. Even though a report by TSN’s Pierre LeBrun indicated the Rangers told teams he’s not available, the media would not relent on the questioning of his play and future.

It came to a head prior to the Rangers 3-1 loss to the Canadiens, where Gallant finally snapped back, “You guys won’t leave him alone.”

Although Gallant said it with a laugh, he was serious about it.

I can’t even begin to imagine how much pressure is on Alexis Lafreniere. While he puts forth a brave front, this simply can’t be easy for him.

Lafreniere probably checks the papers either here or in his native Quebec and there’s trade rumors. If it’s not that, people wonder if he’ll every become the star player many anticipated while he dominated the QMJHL with the Rimouski Oceanic.

It probably has to be like being in school with your parents, family, and teachers, all on top of you to get better grades. Or your bosses and colleagues harping on you to step up at work or you’ll lose your job.

Of course, this is the NHL with tons of critics from fans to analysts in your face everyday. So multiply my analogies by 100.

NHL Network Analyst and former NHL player Mike Rupp recently joined Forever Blueshirts to discuss Alexis Lafreniere’s and Kaapo Kakko’s development. Unlike some critics, he had a much more rationale take on the situation.

“Most first overall picks go to crappy teams,” Rupp said. “This isn’t a crappy team. This a team that was two games away from the Stanley Cup Finals. Gerard Gallant is in a win now mode and I don’t blame him for the lack of opportunities for those guys. It’s just where it’s at right now.

“I actually think that these type of things will help Kakko and Laf long term. They can’t necessarily play the game they’re used to playing for this team right now because they’re not there yet. So if they want to play and be in the lineup, they have to provide something different. I see an increase in their compete level battling for pucks. I see an increase in that and they’ve been much better.”

For me, it’s no coincidence that Lafreniere’s play hasn’t improved since being scratched. If anything it’s probably gotten worse. I just can’t help but feel that all the noise surrounding him is having a negative impact.

There’s still a lot of hockey left to play. The best thing in my mind is to leave Lafreniere alone. Let him focus on playing a more defensive and physical game. Playing with Filip Chytil, or Vincent Trocheck depending on what Gallant does with the lines, means he’ll get offensive chances along the way.

It’s time to turn down the heat on Lafreniere. Who knows, maybe if he could just focus on enjoying the game the points will start coming. 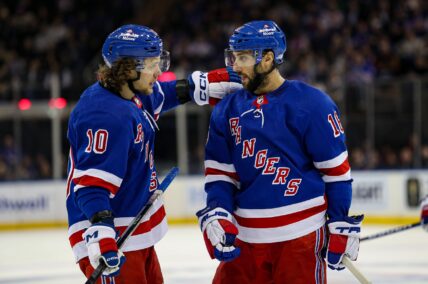