There’s been a lot of charges levied at the New York Rangers organization lately regarding development and in particular 2020 first overall draft pick Alexis Lafreniere.

The ammunition used by critics against the Rangers harkens back to Lias Andersson, who was drafted 7th overall in 2017. In three years with the organization, Andersson only managed to play in 66 games and register 9 points before being traded to the L.A. Kings in 2020. The Rangers used that pick to select Will Cuylle.

A source told me that the selection of Andersson was a “miss” and had nothing to do with development. That assessment appears to have merit as Lias has only managed to suit up for 44 games in three seasons with the Kings, including just 1 in 2022-23.

Alexis Lafreniere was playing well earlier in the season, but has hit a lull with just 1 assist in his last 6 games. On the year, he has 5 goals and 18 points in 41 games. He’s currently on pace to exceed his career high of 31 points set in 2021-22 but it’s a far cry from what fans expected from the third-year pro.

“He’s been okay,” Gerard Gallant said of his recent play. “He comes in every day and tries to get better and he will. I’m not disappointed with him.”

While that doesn’t sound like a ringing endorsement, Lafreniere is being bumped up to the first line to replace the injured Chris Kreider against the Dallas Stars tonight. This isn’t the first time that the youngster has been given these opportunities but if anyone is being impartial, he’s yet to really seize them.

“I keep saying he’s 21 years old,” Gallant said. “He scored 19 goals last year. I was expecting similar numbers this year and it hasn’t quite been there. I’m not concerned about the kid. A lot of people are but I think he’s going to be a good player. He’s got the tools, and the talent. I don’t know how many times I’ve said that he doesn’t get the same opportunities as other kids get as a first overall pick. You can blame that on me or [David Quinn] but we’ve got star players ahead of him. We’re trying to win. That’s my goal.”

A passionate case made by Gallant in the hopes that the fans and the media will ease up on the situation. Despite Gallant’s comments, it’s unlikely he will change the mind’s of many critics.

On the surface, it’s easy to say that the Rangers haven’t had much luck developing first-round picks. Another example people like to point to is 2018 first-round selection Vitali Kravtsov, whom the team refused to just hand a spot out of camp. Instead they assigned him to their AHL affiliate which prompted him to bolt back to Russia (twice) and lose valuable development time in North America. Ultimately, it was Kravtsov’s decision but plenty of people feel the Rangers are responsible for the situation.

Others will point to the slow development of Filip Chytil (2017 first-round) and Kaapo Kakko (2019 second overall). While that’s fair to a degree, both are slowly coming into their own this season and are just 23 and 21 respectively.

What’s most intriguing about these accusations that the Rangers can’t develop first-round picks is the willful ignorance of the recent successes like K’Andre Miller and Braden Schneider. There’s also Adam Fox and Ryan Lindgren, but I’m excluding them because they weren’t first round selections.

And let’s not pretend slow development of first-round picks is exclusively a Rangers thing. One of the Blueshirts’ best players was jettisoned by the Ottawa Senators at the tender age of 22. Yes, Mika Zibanejad was traded to the Rangers for Derick Brassard after a 51 points season to boot.

The defending Stanley Cup Champions, the Colorado Avalanche have their fair share of first-round misses too.

Martin Kaut was selected 16th overall in 2018 and has played a grand total of 45 games to date. Or how about Duncan Siemens, who was taken 11th overall in 2011 and played just 20 NHL games in his entire career. You can add Tyson Jost to that list after being taken 10th overall in 2016. He’s now a member of the Buffalo Sabres.

Everyone also looks at the Tampa Bay Lightning as the gold standard for NHL teams with their recent back-to-back Cups.

Before winning those championships they drafted Brett Connolly 6th overall in 2010 and traded him to Boston by the time he was 22. He played in only 536 NHL games over the course 11 years for five different teams.

The bottom line is that drafting players and developing them isn’t an exact science for any team. While it is incumbent on the organization to give these youngsters all they need to succeed, it’s also on the players themselves to put in the work and make the most of any opportunity given.

Just remember, for almost every first overall pick like Connor McDavid there’s a Patrik Stefan, and Nail Yakupov to go with it. 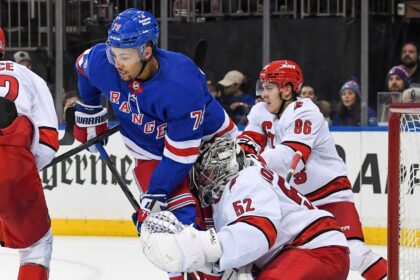