K’Andre Miller will be celebrating his 23rd birthday on January 21 and it would be wise for the New York Rangers to gift him a contract extension.

The young defenseman has already surpassed previous career highs in points and assists. He’s currently at 22 points in 42 games and his .52 points per game average has him on pace for 42 in his third full NHL season.

What’s even more impressive is that Miller has only been playing defense for the last six years since he converted from forward at age 16.

“The kid’s amazing. He gets better every single day,” Chris Kreider commented last season. “He’s hasn’t been playing the position all that long which blows my mind because he’s getting those hard matchups every night. He’s been huge for us all season and we ask him to do so much. The sky’s the limit for that kid.”

Last night, Miller scored his second incredible goal of the season on an individual effort that put on display his smarts, size, speed, hands, and shot. It started the Rangers rally to beat Minnesota in a shootout, as he even added an assist on the third period equalizer.

Miller was drafted by the Rangers in the 1st round pick of the 2018 Draft (22 overall) and has quickly exceeded expectations.

Since playing in his first game on January 14, 2021, Miller has learned to use his 6’5 and 210 pound frame to his advantage. He’s strong along the boards, hard on the puck, and works to clear the opposition from the crease.

Over the last year and a half, Miller has become increasingly better at his gap control, reading plays, and transitioning to offense. More importantly, his confidence level is at an all-time high which is bringing out his best.

Honestly, there’s nothing simple about Miller and the fact he has all the tools to be a top-four defenseman in the NHL for a long time. That’s why it would be prudent for President and General Manager Chris Drury to hammer out a contract extension as soon as possible.

Miller’s entry level contract ends in July and he will be a restricted free agent with no arbitration rights. That gives the Rangers some control and the ability to bridge him with a smaller deal of around two years and a cap hit of anywhere between $2.5M to $3.5M.

Of course, he’s not the only player the Rangers must sign this summer with limited cap space. Alexis Lafreniere and Filip Chytil need new contracts, but let’s worry about them for another time.

The Rangers have an opportunity to follow a similar path as they did with Brady Skjei, who potted 39 points in his rookie season. After Skjei’s sophomore campaign of 25 points, then GM Jeff Gorton gave him a six-year contract with an AAV of $5.25M.

At the time, many felt that it was a smart cap move but it ultimately was an overpay. The Rangers opted to buy up some free agent years from the then 24 year-old defenseman which drove up the AAV. Skjei was eventually jettisoned to the Carolina Hurricanes for a first round pick during the 2019-20 season as part of the rebuild. That pick and a third round selection was sent to the Calgary Flames in order to draft Braden Schneider in 2020. All’s well that ends well, they say.

Now that we’ve gotten some history out of the way, including lessons learned, let’s look at Miller’s situation.

The Rangers could go the same route with Miller and buy up free agent years. However, I would advise against it because the team is likely going to have to move out a player like Barclay Goodrow in order to keep both Lafreniere and Chytil. Goodrow is one of the few veterans without a full no-move clause.

This summer, the Rangers will get back $3,427,778 in buyout penalties per Cap Friendly. All of that and some more should be allocated to extending Miller for at least four seasons.

That would be beneficial for both parties as the Rangers can likely find an AAV around the $4.5 million mark and Miller’s camp can ride that contract to unrestricted free agency at 27 years of age.

At the end of the day, the Rangers are going to have to make some hard decisions. K’Andre Miller doesn’t have to one of them. Extending him now is an absolute no-brainer. It’s only going to become more expensive with each passing game. 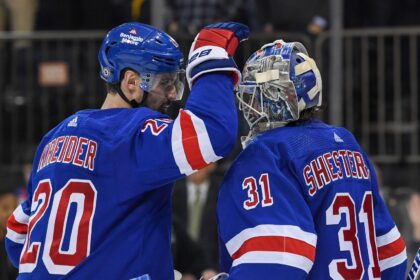