An early favorite to win the first ever Rod Gilbert “Mr. Ranger” Award

Nov 18, 2017; Montreal, Quebec, CAN; New York Rangers former player Rod Gilbert waves to the crowd as the Montreal Canadiens honored the contribution of the six original teams to the National Hockey League during the centennial of the circuit before the game against Toronto Maple Leafs at Bell Centre. Mandatory Credit: Jean-Yves Ahern-USA TODAY Sports

Rod Gilbert’s trademark number 7 was retired on October 14, 1979 and will forever stand as a testament to one of the greatest Blueshirts in franchise history.

This season the New York Rangers announced they will honor his memory with a #7 patch on their sweater. In addition, the organization has created a special new award to be given out at the end of the season.

The Rod Gilbert “Mr. Ranger” Award, will be presented annually, starting this season and it will recognize the Rangers player “who best honors Rod’s legacy by exemplifying leadership qualities both on and off the ice, and making a significant humanitarian contribution to his community.”

When you look at the criteria for the award, you need to understand who Rod Gilbert was. He wasn’t just a Hall of Fame player, he was the team’s greatest ambassador. But most importantly, it was his charitable work.

A look at the Rangers roster shows at least one stand out most likely to win the award in its first year. Chris Kreider is the early favorite to take the honor and here’s why.

Leadership: The 30 year-old winger is entering his 10th season on Broadway. He’s always been charismatic but over time has taken young players under his wing. “I wouldn’t view myself as a huge rah-rah cheerleader, I’m definitely not quiet on the bench or in the locker room, I like to work with people one-on-one,” he said about his leadership style. “I’m grateful and appreciative to be here, and if I can help direct people towards that, I’ve done my job.”

Charity: Of all the Rangers, he’s currently the most giving. Since Henrik Lundqvist has moved on and retired, Kreider picked up the torch. Last season, he was the team’s nominee for the King Clancy Memorial Trophy, awarded to the player that best exemplifies leadership qualities on and off the ice for humanitarian contributions in their community. Kreider’s work with sick children and the Garden of Dreams embodies what Rod was all about. 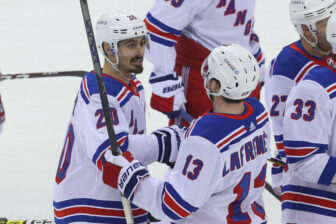 Vlad Tarasenko is at Blues camp and doesn’t want to talk about his trade demands. That and more here.