Another Day, Another Loss; Ducks Defeat Rangers 6-3 In Anaheim Here is our recap of the latest Rangers loss, this time a 6-3 defeat to the Ducks.

Rick Nash – Perhaps the lone bright spot for the Rangers in this one was the play of Rick Nash. The 33-year-old winger has been on a tear lately and picked up his fifth and sixth goals in the last five games. Nash evened the score at one with a power-play goal, taking the Mats Zuccarello pass at the side of the net and went directly to the net, beating Gibson to the far post.

For his second of the game, Nash put in the rebound of Tony DeAngelo’s point shot, winning the battle at the top of the crease to tie the game at two. Nash has played with heart and intensity all season, and his chances are finally starting to go in.

Nash is playing for his next contract right now. He will be a UFA for the first time in his career at season’s end, and if the Rangers don’t want to “lose him for nothing,” they should look to trade him at the deadline. The Blueshirts are not anything more than a wild card team this year, and as such should look to sell high on their pending free agents.

Michael Grabner – Speaking of pending free agents, Michael Grabner continued his stellar offensive season in scoring the third, and final, goal of the game for the Blueshirts. With the Rangers shorthanded, Mika Zibanejad picked up the loose puck after Ryan Getzlaf whiffed on a shot. Zibanejad hit the streaking Grabner, who beat Gibson between the legs to bring the Blueshirts within a goal. Grabner’s goal was his 21st of the campaign, and he’s had the best offensive years of his career with the Blueshirts. He could be someone to build around for the future but don’t be surprised if Jeff Gorton decides to shop the 30-year-old Austrian winger at the deadline.

Tony DeAngelo – For all the hoopla that surrounded Tony DeAngelo and his coming to the Rangers, he has been a solid player since his recent call-up to the club. DeAngelo has done a solid job in his own zone, which was a big concern when he was acquired in the Derek Stepan trade. DeAngelo displayed his physicality in this one throwing two solid checks on Antoine Vermette in the third period. DeAngelo is going to get his chance to show what he can do with Kevin Shattenkirk recovering from his injury, and performances like the one he had in this one are a positive sign for his future with the Blueshirts.

Goaltending – Henrik Lundqvist had one of his worst performances of the season in this one, giving up three goals on the first six shots he faced. Lundqvist was pulled after that third goal, making way for his understudy Ondrej Pavelec. Pavelec had no chance on the first shot he faced, a shorthanded goal for Adam Henrique after a horrific turnover by JT Miller. His second allowed goal was scored by Rickard Rakell with the Ducks on the PP after Pavelec was unable to corral a deflected point shot. Rakell was at the side of the net for an easy goal that put this game, and many Rangers fans, to bed.

As for Lundqvist, who has been carrying this team since the start of November, him having an off-night is certainly understandable. But two of the three goals he allowed were ones that he should’ve had, and he said as much after the game.

Lundqvist: “I was just too slow for whatever reason; I just didn’t have it. I’m not going to feel great every game. I have to stop two of those three, I have to come up with the saves. I was not able to raise my game. It happens.”

Lundqvist will be in action over the weekend at the All-Star Game, so he won’t be getting much of a rest before we turn to the home stretch of the season. Lundqvist will need to be just about perfect the rest of the way with the Rangers playing sub-par hockey in front of him.

Alain Vigneault – As I said last night on Twitter, I am not one to kill a coach for some bad decisions in a single game. But we’ve seen Vigneault’s decision-making erode this team’s ability to win games over the course of the season. His players are not performing well enough to win on most nights, as the latest losing streak clearly indicates. But it is the way the team has been losing that forces me to question the head coach. Silly mistakes, passing up shooting chances and poor defensive zone coverage have been the bane of this team’s existence this season.

JT Miller being benched for his turnover in the first is understandable. But with points so valuable and hard to come by as of late, why are you going to play shorthanded, effectively, for the rest of the game? Sit him for the rest of the period if you’d like, but sitting your third-best scorer for the final 40 minutes makes absolutely no sense.

Quote of the night.

Will say, though, AV has a serious Love/Hate thing going with JT. https://t.co/ajBOHXOprX

And when it comes to things making no sense, how are there still defensive zone breakdowns on every other shift? The bulk of this team has played the same system for the last 4+ years, and the fact that the opposition is getting multiple “Grade-A” chances shift after shift shows that there is a major lack of trust in not only the system but in the man employing it.

And finally, because I don’t want to pop a vein in my fingers from typing, I leave this meme to show my frustrations with the Rangers passing up shots. 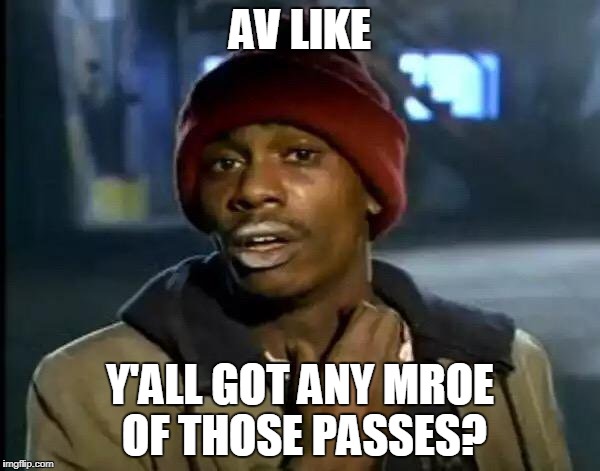 Yes, they tied their highest shot production of the season, but they have passed up so many chances this year that it begs the simple question; what the heck?

Alain Vigneault will, in all likelihood, finish out the season with the club. But as I’m sure most Rangers fans feel the same way that I do, this man should be good as gone when the season ends.

Next Game: The Rangers will try and salvage at least two points from this road trip when they face the Sharks on Thursday. Puck drops at 1030!