Artemi Panarin is unquestionably the New York Rangers best player. There’s no debating it, and it has nothing to do with the fact he’s one of the highest paid players in the NHL. Only Connor McDavid makes more per season.

Ever since the Breadman opted to sign with the Blueshirts, he’s been the straw that stirs the drink. In his first season, he was a finalist for the Hart Trophy but lost out to Edmonton’s other star, Leon Draisaitl. Last year, he missed 9 games after unproven allegations of assault from a former Russian coach forced him into a leave of absence.

Who knows, if he doesn’t miss those games the Rangers may have made the playoffs. One thing that is statistical fact would be his 1.38 points per game average since hitting Broadway. That number is third best over the last two seasons in the entire league with only McDavid and Draisaitl ahead of him.

It does make Panarin a logical choice to be considered for the next Rangers captain, except he doesn’t want it.

Panarin does not want to be captain

The 29 year-old Panarin proudly wears an A on his jersey, but has no desire to make that a C. “It’s not just putting a letter on the sweater and walking around taking pictures, it’s a lot of work in the locker room,” he said according to Russian outlet Championat. “It’s not just about playing good hockey.”

Panarin noted that the captain’s main job is to motivate players with lots of work in between periods. Something that requires excellent communication skills.

Former GM, Jeff Gorton recently joked on the Cam and Strick Podcast that Panarin spoke perfect English, but he’s obviously not comfortable doing so. He even pointed that out as a concern.

“I’m just afraid that I won’t be an effective captain. I don’t really speak English,” he said. “How can I motivate? I can influence the game on the ice and they will listen to me without any letters.” 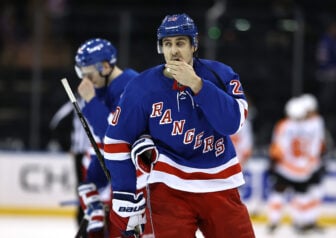 Panarin believes there are other “worthy candidates”

Artemi may not want to be the captain but explains that the team does need one.

“I’m not sure where this is all coming from, but we don’t have a captain on the Rangers and we need one,” he said. “But we don’t talk about it in the locker room.”

During the IG Live interview with Hockey In The Know, Panarin alluded to their being more “worthy candidates” than him for the role. Those players have been talked about this summer with Chris Kreider leading the pack. Jacob Trouba and Mika Zibanejad are also under consideration within the organization.

Adam Fox also addressed the vacancy on a recent episode of NHL.com’s At The Rink Podcast.

“It’s tough to say about needing one. i think we’ve had some guys who are great leaders, and guys with experience,” he began. “The way our team has been with young guys, it would have helped with some direction with one guy to have a voice in that sense.”

Ultimately, the Rangers will name a captain this season. Chris Drury said it’s a “priority” and wants Gerard Gallant to have some time to assess before a final decision is made.

In the end, it will likely be the longest tenured Ranger, Chris Kreider. He even got a ringing endorsement from a former teammate.

“He does everything right,” Brian Boyle said to NHL.com. “He’s been through everything on that team and now he’s the old guard, even though he’s not old. He’s still got wheels, he’s a high-character person, a smart individual and knows what it takes to win. I’ve been friends with him for a long time, so I’d love to see that.”

NHL News: 98% of players to be vaxxed

NHL deputy commissioner Bill Daly told multiple media outlets Friday that the league projects 98 percent of its players will be fully vaccinated against COVID-19 by opening night of the 2021-22 season next month. Read Story Here.