The New York Rangers scratched Braden Schneider when they acquired Justin Braun at the NHL Trade Deadline for a third-round pick.

Paired with Patrik Nemeth against the New Jersey Devils, the duo had a good first period but then collapsed (much like the team) for the final 40 minutes of play. They were each a -2 for the game and were pinned in their own zone almost every time they were out there.

The Blueshirts lost that contest 7-4, which prompted the return of Braden Schneider to lineup. New York has gone 4-0-0 since the move, with the rookie collecting two points (1G – 1A) and +4 rating.

Braden Schneider has earned his place on the team

The rookie has played in 30 games this season and is putting up rock-solid numbers. His play is even more astounding when you realize he’s just 20 years-old.

So far, Schneider has scored 2 goals and 6 assists for 8 points. His CF% of 40.8 is respectable, especially considering he starts in the defensive zone 54% of the time.

What’s impressed me the most is his poise with the puck at both ends of the ice. He simply doesn’t seem to get frazzled. This was highlighted against the Penguins when he jumped into the play to score a huge goal, which was followed up by a better defensive play late in the game.

Schneider hustled back to stop and odd man chance with a beautiful diving play that broke up a cross-ice pass. A goal there would have been crushing but instead the Rangers received another highlight from the young defender.

“He’s a confident kid,” Gerard Gallant said. “He’s sees the open ice in the middle and made an outstanding shot. He reads the play well and is a great player for us.”

The fact that Schneider is doing this as the Rangers are in a heated race for playoff positioning is even more impressive.

“It gets hot out there,” a smiling Schneider said after beating the Penguins. “It’s getting harder and faster. It’s been a lot of fun.

“We have such a great room of guys and to be playing with everyone on our team and to be part of this is pretty special. I just hope we can keep rolling like we are.”

Schneider should start in the playoffs, Braun needs playing time

Schneider has been real good this season. However, after seeing him play in the WHL, where he won Defenseman of the Year in 2021, he has a whole other level in his game.

While he has picked his spots carefully in the NHL to jump into the play, he has yet to unload the big hits we’ve seen from him in the past. That will come with time and comfortability at this level and with his defense partner.

Jacob Trouba, whose Schneider is often compared to is a great example of this. While he was throwing hits last season, they do not match the thunderous bombs he’s unleashed this year. That’s because after playing a whole season with K’Andre Miller, they’ve reached a high level of trust.

Stepping up for a big hit sometimes takes you out of the play and you need that sense of security your partner is going to be there for you just in case.

Gallant probably already knows that his best lineup for the playoffs includes Schneider, but he’s already committed to get Justin Braun back in there.

“I think that motivation has been there the whole time,” Schneider said about the competition. “[Braun] is an awesome guy and I’ll just keep doing what I need do out there.”

There’s no doubt that Braun has to get reps with the Rangers and soon. He can’t be thrown in during the playoffs and expect to be successful. Not without having a sense of familiarity with Nemeth and the forward lines. 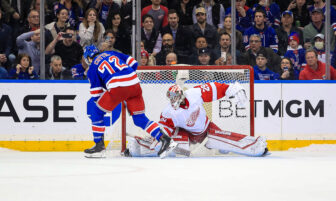